I have public variables, but they arent aviable to set up on other blueprints 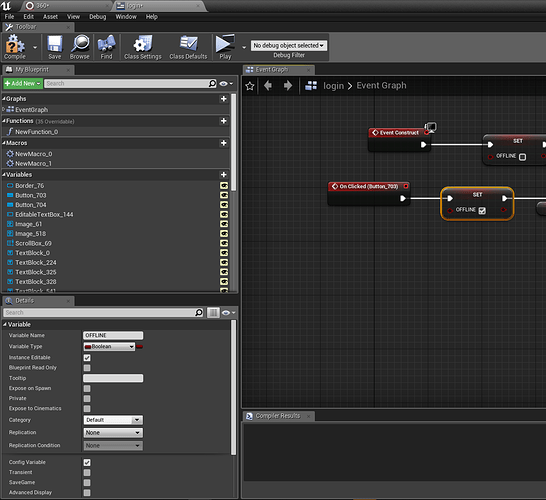 the blueprint when i cast other blueprint, all public variables from that aren’t available to set up or read as you can see on log.png

It looks like your Blueprints are compiling okay. I don’t see the problem in the screenshots you posted. Can you explain the problem a bit further? 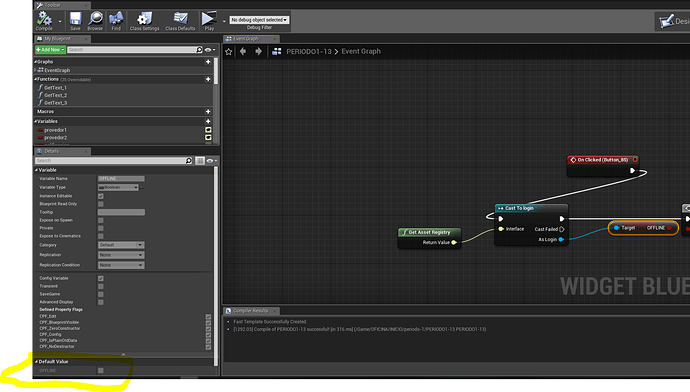 If you are trying to change the default value of a variable, that can only be done from within the blueprint class that ‘owns’ that variable.

Specifically, you can’t change the default value for that OFFLINE variable from where you show it being highlighted. If you need to change that variable’s default value, you’ll have to do that in your “Login” class.

Everywhere outside of your “Login” class, you’ll need to use a Set node to change that variable’s value.

Maybe things are being executed in a different order than you’re expecting. I suggest trying to troubleshoot using debug print nodes or using the blueprint debug system to figure out what’s going on.

If it’s returning false, then it isn’t being set to “True”.

You’ll have to show where it’s being set to True, and confirming that the change is taking place. You can print the value after setting it to verify.