I don't have enough memory to pack my game, can you please pack it for me (etc2)

I don’t have enough memory to pack my game, can you please pack it for me (etc2)

I need help packing. Whatever I do doesn't happen. Blueprint

As @High500 suggested, it may be due to RAM. I suggest closing everything but Unreal Engine when packaging. It will most likely ensure that there is enough RAM for the packaging process.

What is your PC that you running into the issue on?

I bought an asus e510ma, that’s all my money 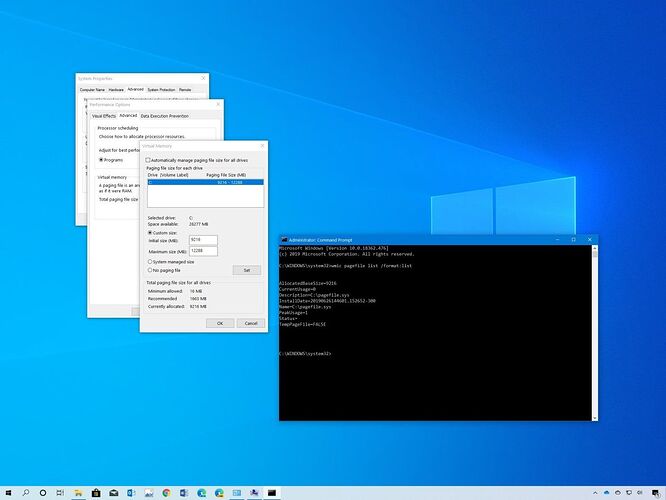 How to change virtual memory size on Windows 10

If your device is running low on virtual memory, you can adjust the size using Settings and Command Prompt, and here's how to do it.

Wow dude, just wait a while and get another 4 gigs, 4 gigs as an upgrade = 20 USD or something. Why are you rushing. It’s not like your game is going to run away from you.

Windows 10 will eat half of what he has just to boot up, I don’t think he has windows 10, maybe windows 7. It’s what I use to avoid the ram trap and I have 8 gb and I feel my ram just flushes down the drain with the unreal system really fast.

Win10 actually is slimmer than Win7, as well I don’t think current versions of Unreal even function in 7, but I haven’t tried to use 7 since I upgraded an army of 2GB all-in-one PCs to 10.

I have doubts that it’s even possible to package anything other than an empty room in Unreal in 4gb, but virtual memory will do wonders, even if it’s slow af.

8gb is probably barely cutting it. I just upgraded to 96GB, and I might bump it again soon because I’m still getting some OOMs when packaging

anyway, probably the only way this project is getting built by this person is if they apply a lot of virtual memory, or plugin more actual memory

i can’t even imagine doing anything in less than 16gb these days, especially not compiling/packaging

Well yea, 16 is better and not expensive, I’m going to make that leap soon and get 8 more, so can our subject here, he just needs some “time”

That is maybe India, I don’t know, well guess you can put away and wait another 8 months, not a tragedy, I wait to get stuff that I want, it is how it works. I will also want another Vid Card so I have to put money away for it. Wait your turn and solve your problem, best answer is : Time Solves All your Problems

yikes. well, if you have any decent speed USB disks around, make sure you’ve got one or more plugged in and are using ReadyBoost, and that you’ve got probably at least 32GB of virtual memory available. It’ll be slow but it’ll probably complete

yes it did, but now it repeats after a while, what should I do?

looks like it’s busy doing something. that’s just editor log. i’m guessing in addition to having very little RAM you also have very poor CPU and GPU in comparison, so a package is likely to take a very long time.

either that, or it’s already done, and it’s waiting for you to do something else