This has been reported before and is being looked into. The work around that we had previously involved turning off simulating physics again just before moving the actor, then enabling again when it reached its destination. Let me know if you have any questions and I will be happy to further assist.

I believe I found a bug.

When create a child blueprint and turn the simulate physics on for the mesh in it, and I try use use the Set Actor Location node, it doesn’t move to the new location.

If I do everything the same with an identical blueprint that isn’t a child it moves to the new location as expected.

I created an example template to demonstrate. Basically I have the same blueprint setup twice, one is a child, the other isn’t. 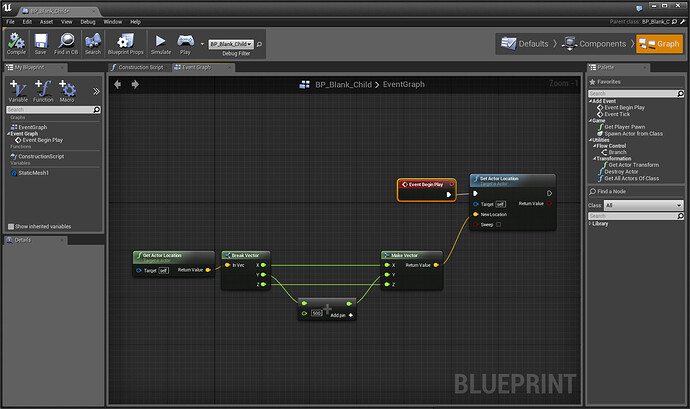 I guess my question is, Is this a bug? If it isn’t, then how to do I get around it?

Ahh, seems like a simple enough work around. Thank you for the quick answer

Just want to report that nearly a year later this is still a bug. Would be great if this got looked at sometime soon!

I concur. This is still an issue. Though it is a simple workaround, it would be nice to have this functioning properly.

Hey everybody, I’ve gone into the ticket for this issue and added some more details. There are a few different reports about this same problem, so I went into the report to added more comments and changed the level of importance to be higher. I’ve also brought up this up to a few other developers for when we do a big “fixes only” push to get it included. I do not have an ETA though. Please let me know if this bug changes at all so I can update the report.

Would just like to note I’m experiencing this problem with a Paper2D sprite as well. Frustrating! Can’t believe this bug is still around after a year.

This bug still exist? I have suffered the bug too. it is a really big big problem on my project… please fix it hurry…

The same problem here. It’s strange because I hadn’t any problems with this couple days ago.

EDIT: No… sorry my mistake.I found a problem in other place.

Still happening in 4.18.3 the workaround did not work, its like it is ignoring the Set Location and Rotation completetly. My child just stays in place