I cant fully destroy actors after I spawn them! ActorIterator still finds them. What is Better Destroy Method?

I provided a setup to easily test

-deleting all the objects in world (SHIFT + T)

-in the console you can see the whole list that is being run through each time SHIFT + T is pressed, showing lots and lots of nones, uses the code I’ve posted, an Actor Iteratorloop

so I may not be exactly coherent.

It seems I cannot destroy actors I create, after I spawn them!

I am using the most rigorous destroying method I know of.

I am calling a full purge of the GC after each actor is destroyed!

#Is ActorIterator Keeping Them To Avoid Disturbing It’s Indicies?

I just thought of fact that maybe the actoriterator is preserving them somehow since iterating over a list of actors as they are being destroyed might be confusing to manage.

#Visually and Collision-Wise, the destroyed actors do disappear

The odd thing is

when I run my destroy function

And their collision also goes away after a momentary pause (0.5-1.5 seconds or so)

But if I run my actor iterator over all versions of my static mesh actor present in the world, they are STILL in the world at their same locations

When I run the above code after destroying them all, I get output showing them as still being at their locations, even tho they are no longer visible

#If I Call Destroy Twice, It says None…7 times (they’re still there) 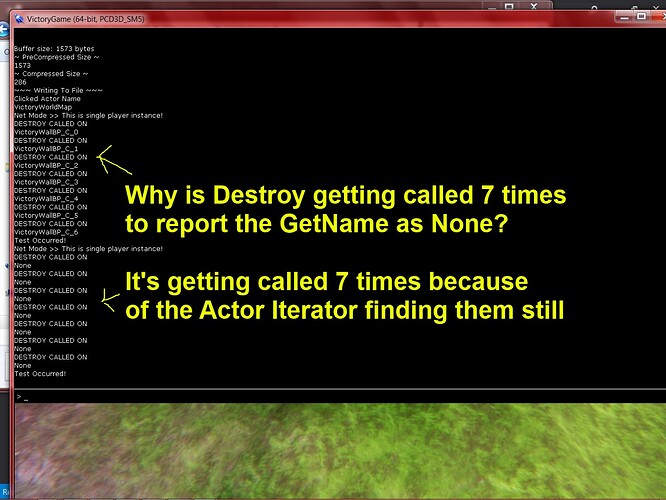 Is there a different series of functions I should be calling to destroy Actors spawned during runtime?

I can spawn Static Mesh Actors during runtime

There are no addtoRoots() or UPROPERTY() references to the created SMA’s, ever

#Stronger than Full Purge of GC?

Whatever ActorIterator is doing, shouldnt a full purge of the GC be more powerful?

Any help would be very much appreciated!

I thought the destroy function I created was as aggressive as I could possibly make it!

Looking forward to hearing from you!

currently I am working around this by using

but am I going to have to do this for the rest of my life?

(even if I use forloop, while is just my stylistic choice)

How do you destroy stuff over at Epic?

#Is this a Memory Leak?

I created and destroyed about 200 objects

Every time I try to delete them, it runs through the full 200 or so via the actor iterator

I then left my game running for about 20 min

and ran the delete function again

Is this a memory leak?

#Behavior is same with Object Iterator

I just checked and the behavior is exactly the same with Object Iterator, the objects do still appear to exist

how do I permanently get rid of them so I dont have to use the inconvenient work around?

Im curious did you try accessing any of these supposedly deleted actors from the list? Obviously the list would return a value but Im interested if the actual actor was still there in memory or if the reference was bad.

They were indeed accessible, I could call GetName() on them, even though it returned None

Okay I just wasnt sure because you compared it against none in the above code.

I solved this problem using K2_DestroyActor()

Here’s my complete code for anyone’s use

Have you checked to make sure you aren’t keeping a reference to the actor?

yes I am not keeping any references, I do not added the spawned meshes to any arrays and spawn many many of them, as I am building a world this way.

So I’m quite puzzled

The fact is, they ARE disappearing and losing collision, but they just cannot be fully GC’ed no matter what I do

The entire spawn code looks like this, very simple

AVictoryWall is a temp ptr ref and there’s no UPROPERTY() references, ever.

changing SpawnInfo.bNoCollisionFail to false did not change the behavior

I provided a setup to easily test

-deleting all the objects in world (SHIFT + T)

-in the console you can see the whole list that is being run through each time SHIFT + T is pressed, showing lots and lots of nones, uses the code I’ve posted, an Actor Iteratorloop

Any further assistance with or without checking out my project directly would really help, as I have no idea how to fix this issue

I tried calling ConditionalFinishDestroy a few moments after calling BeginDestroy, multiple times, but this did not stop ActorIterator from finding all the objects with name None still.

Just as a heads up @rama, this became very useful for me just now. Thanks for posting this!

(if I could produce repro steps and a bug report, I would, however in my test bed I don’t get this issue and my level designer does [RAM increasing over a number of games], using K2_DestroyActor instead of Destroy() works though… so… yay)