I cant Figure out how to use Bind Events

I don’t know what exactly you’re trying to do, but seeing your vid :

If you just want to change camera when clicking a buttons in 1 user interface blueprint use Click events. You could use bind events (you’ll probably need them later), but you didn’t set up any event dispatchers. Custom events (what you’re using) are different from event dispatchers. Someone correct me if I’m wrong, but “bind events” are only used with event dispatchers.

There’re prolly 5000 other ways to set it all up with on clicked events, but you could:
Select your button on the left side of the design view, and then, on the right side, click the green + button by On Clicked. 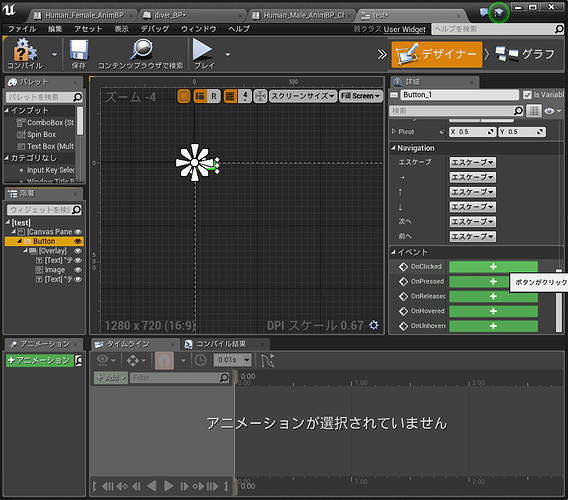 It’ll automatically put the event in the event graph and open it. Then you stick your OnClicked node into the camera junk. 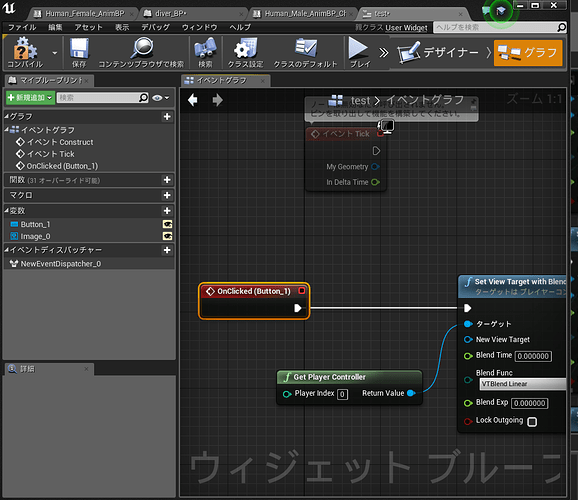 I recommend you watch some event dispatcher tutorials to find out how to bind and call events. EDs are powerful, and probably overkill/inapplicable to what you’re trying to do. I don’t know what for sure you’re trying to do though.

This is a good tutorial : UE4 Event Dispatchers - YouTube

additionally have a look at this documentation page: Event Dispatchers | Unreal Engine Documentation

I Couldnt figure it out even with the video

Can you please tell me what is the actual event you are trying to bind ?
cause event for being bind should be relevant to the blueprint class too. so it might be an event related to another blueprint. please share me a bit more info and then I can help you

Here is the video where I show all you need to set up those FNAF (five nights at freddy’s) cams.

(I forgot to mute the music I was streaming in the background, so you’ll have to mute it yourself if it distracts you.)

Also for some reason those breakpoints I set up in the level blueprint didn’t hit. I just now fixed that issue by putting a breakpoint on the G button press. Having done that, all of them are hitting now, even after removing the one on the G.

As far as I see from the errors your problem is not with bindings, but rather with the variable that you try to bind the event to being NULL.
This is rather a different problem. If you wanna make a practice with event or if you wanna describe us the issue use a bit less complicated example

I apologize for coming off hostile. Some things I said were inaccurate, so I deleted them.

Where are you creating the “Camera Map” User Interface Widget?

I don’t think it’s a good idea to set up those binds in the Level Blueprint’s Begin Play, because it’s probably unlikely the “Camera Map” widget the events belong to exists. Also, you’re not setting that Fnaf Cams to anything before the binds. so that’s probably not good.

OMG THANKS U .U HELPED MEH SO MUCHDAHDLGADLB

I spent more time trying find out what your problem was, let alone trying to find a solution to it, than you did trying to describe your problem. You also ignored plangton when he was trying to help.

i did ignore him i replyed to him.