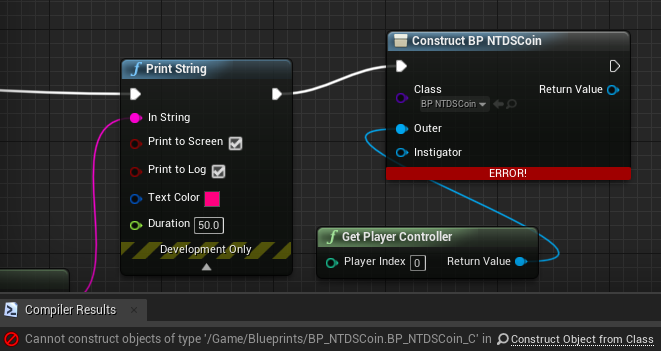 I created a blueprint out of some static meshes, added a WHOLE LOT of functionality to it, and only now am I being told that I can’t ever spawn the actor from inside a blueprint.

It’s a coin, with all sorts of custom details. This is a massive gamebreaker.

What I can’t figure out, is how in the world this is even some sort of option, let alone the default behavior. Why in the world would I ever create a blueprint and specifically want it to be something that I could not spawn in the game world? This is bizarre. It makes no sense. My brain is hurting too much from the fact that this is even possible, I can’t even begin to think of how I would go about solving this problem.

There is no typed C++ code in my project, (I know there’s some behind the scenes and whatnot) I have no idea how to even access the relevant parts of the game code to change anything, and all of the topics close to this subject from the searches I’ve done seem to be years old and marked as solved because someone was able to just edit the class definition or something. I’m totally lost on where to go to even start to fix this.

Probably because you are using Player Controller in there. What is the actual compiler error in full? It’s cut off, and they usually tell you exactly what you did wrong.

Oh wow, so I figure I’ll post this in reply rather than deleting my thread, but this was just a case of mistaken identity.

The function I wanted was SpawnActor, not Construct. Don’t know what I was thinking but it would have been easier to copy and paste from another area in the project! 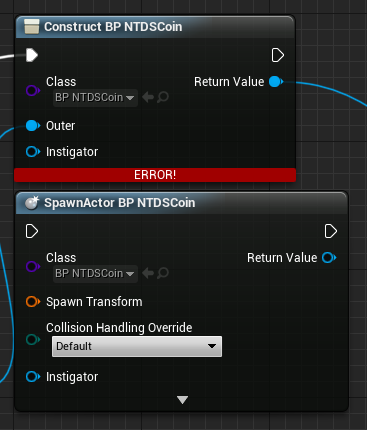 Oh wow, so I figure I’ll post this in reply rather than deleting my thread