Hello Community, we are about a dozen people working in Arizona to create the first city in VR - we are calling it Hypatia. Today we sent out our first press release, shared a video, and will start sharing more about our world in the coming days, weeks, and months. Things not seen or spoken about in our release and video yet are our voice recognition system we are using for navigation, personal assistants, and giving NPC’s a kind of presence by enabling them to talk to players. We have also created our own version of “Tilt Brush” in Unreal that works on the streets of our city to build sculptures and whatever the player sees fit. Next up is our 360 theater where we are streaming 360 video into game. We are not releasing Hypatia before the end of the year - we have a lot of work left and many surprises.

Screencap of our founder painted with our 3D painting tools in Hypatia: 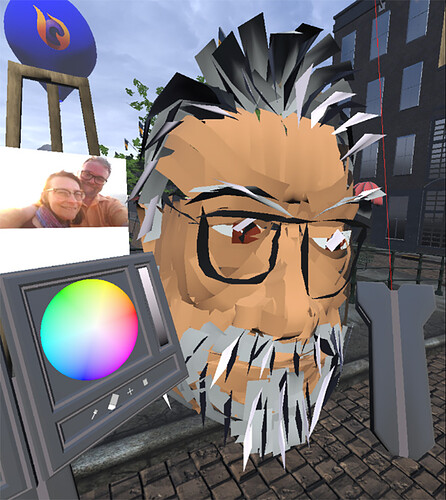 Another screenshot from Hypatia

As Google has Tilt-Brush and Oculus has Quill we here at Timefire created our own 3D/VR painting system. The code name during development is S.P.A.S - Spatial Paint & Arting System. We’re working on functionality not a great name yet! You might also notice that we have integrated the streaming tiling mega texture capability from Graphine’s uber cool software called GRANITE. There are other functions to our toolset but we had to back off things like particles as we put the finishing touches of integrating 2k textures to be used as a brush in our world. Graffiti in VR promises to be amazing.