Im making a grid-based inventory system and when an item is picked up i want to update the image thumbnail inside the inventory. To edit the image im setting the hud widget to a variable when its created so i can edit it directly when an item is picked up. It works fine for the server but the problem is that the variable never gets set on the client and is always none so i cant access any of the variables within the hud widget. 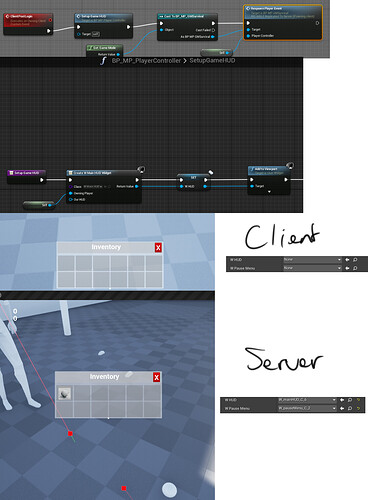 Only thing i can think of is replication of HUD varable, UI should only exist in client and not replicated and HUD it self should visualize game state seen in client memoery at most get info call from replicated function calls in other classes to inform client HUD to do something

Ive tried replicating the variable and not replicating it. Ive also tried creating the widgets in event beginplay to bypass everything in the game mode, which didnt work. I created a new project and tried the same setup (using event beginplay and leaving gamemode default so everything is done inside the player controller) to see if that helped but still got the same results, not sure where to go from here.