How you guys make hair for character? like in Paragon

Im really new in game assets, so hope you guys can help me

I want ask about character creation, I think this is general question, Im using paragon character for example because their are really realistic…
In paragon, the character has a realistic hair, so…

this is screenshot from video: 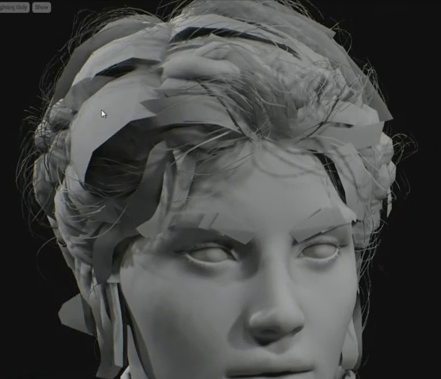 Actually, Im already watch the video, I think their talking about hair texture creation at 33:00, but english is not my language, so my listening skill is bad so Im not 100% understand what are they talking about

I only 100% believe that I heard Jordan said “like modo”
and if Im not wrong, he said something like make the hair, and lay it on screen/scene, then bake it into few map and make alpha texture, so for second question is they make hair texture using 3D approach?
and Im hear something like “car? card? or char?” what is that?

I think this is general technique, so if you have your own way to make it, I really happy to hear it too

–most 3D programs have some type of hair rendering integrated into it, you can use this to render a group of hair to make a set of textures
–map the textures to very simple meshes–start out with a plane. These would be called “hair cards”, they can be as simple as a plane for stuff like short hair, or for longer hair you would have more segments in the mesh so that you can bend it.
–The special thing they were talking about is the material, they designed it to render hair more realistically. The hair material will be available for free in the next release of UE4–4.11, but you’ll need to check out that video or maybe they’ll have some documentation since there’s some settings there and some specific texture maps that they use for the hair to be more realistic.

Besides the “hair cards” they also used some modeled hair strands in the hair as you can see in that screenshot, that’s just an added effect to make it look even more realistic, the modeled hair was made using their hair tool in their 3D program.

So for hair strand, just using thin plane mesh with more segments to make it smooth,
but, how for eyelashes, is that polygon plane with alpha map or using thin mesh for each eyelashes strand like for hair strand?
I hope this new hair shader suitable for wet hair, I cant testing it, because Im not using 4.11P1, my internet is limited, so I will wait for final 4.11.

Use a polygon plane with a hair texture with alpha map
There’s a couple other texture maps that can help make it look even more realistic–the material that is included in 4.11 uses a depth map (black and white render of hair where black is further away and white is closer) and adjusts the pixels in the material so that the texture looks like it has more depth so that it doesn’t look like a hair texture mapped to a plane.

They’re using hair cards, as aforementioned. This process has been around for a long time and you’ll be able to find a plethora of tutorials on the process. Here’s one: https://www.youtube.com/watch?v=6Wi4-fdeYyM