How to use different timer handle for the same function when using the set timer by function name node in blueprint?

I’m new to UE4.26 and having two problems to trigger one function periodically in a certain period of time.

First question: How to call the function once at start before it runs periodically and control the total looping time?

For example, I have a function called OnFireDamage. When I triggered it for the first time, I want to set a timer for this to trigger it periodically for a certain time. For example, I throw a fire ball to the enemy and set him on fire, so he would take fire damage every 1 sec for totally 5 seconds. As I want him to take damage at the very beginning, for 5 seconds totally, he should take the fire damage for 6 times.

When I’m using the set timer by function name node in blueprint, I didn’t find a way to make sure the function is called once when the timer starts. And I also can’t find a way to control the total looping time.

Second question: How to have different timer handle for the same function?

As the Set Timer By Function Name node tooltips says that “Set a timer to execute delegate. Setting an existing timer will reset that timer with updated parameter”.

The timer won’t run immediately. If you want that effect, you have to call the damage node at the same time as setting up the timer.

To stop the timer after a certain number of iterations, you need to count them and invalidate the handle when you reach X iterations.

The other scenario you’re describing is actually two timers, you can’t run one timer with two timer handles. 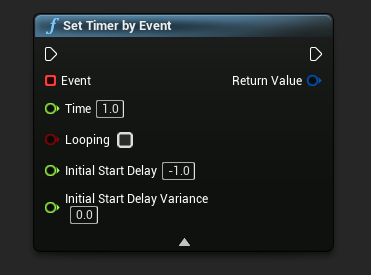 Wishing for Initial Start Delay to be 100% reliable in UE5

Normally, yes. It almost always does. Until that one time when it does not, leaving you scratching your head for 30mins.

Calling it manually after starting the timer does it, as you suggested.

On an unrelated note, thought I’d share my morning snafu. Don’t do this:

I am aware of pure node evaluation and still hook things up like that every now and then.