can you be a bit more specific? punctuation also helps us understanding what you are writing.

I just checked out your other posts and it seems like you want to get the content of ARK into a UE4 vanilla projects. You know that you can do that in theory but you wouldn’t be able to show, share or sell any project that is using this content without breaking copyright laws?

If you can’t figure out how to repath and build the materials I would suggest you start with some basic tutorials on UE4 and materials first, and get a general knowledge on how to use the engine. I doubt you are going to find anyone to actually tell you how to rip out ARK assets though, even if you only intend personal use. Wildcard probably isn’t going to condone such actions. You could buy some items off the marketplace though.

Incidently, Wildcard has used some third party content that does not allow for a license transfer, ie. you ripping the content would be technically illegal.
For example “Ultimate Rocks” is third party content, which you can actually purchase here: 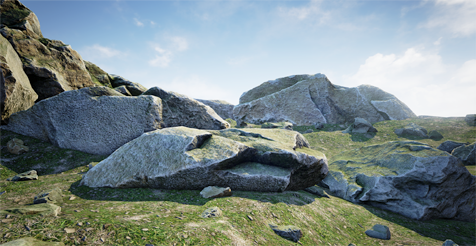 *Except within the context of being content for ARK of course, like making maps. By extension you can (probably?) modify such content, such as textures, as long as it’s within ARK, and as long a you are not monetizing it.
Though the monetization aspect starts to get really murky but that’s a whole different question.

You are asking for a whole lot of legal trouble if the game was to ever leave your machine. Best to just make your own or purchase from the marketplace.

As long as you never share it with anyone you can basically do what ever you want. But I don’t know how many people here are willing to help you with that. I for example just don’t know how to besides using the “migrate” option. But you know that from your 5 other forum threads already.