How to texture properly without Tiling

I have asked this question before, but this time it’s kind of more complicated, And I’m not sure If am looking for a fix or a whole alternative way.
for texturing, I’ve been applying a texture and modifying it with TextureVariation Node, However, on big meshes, you can still see a bit of tiling and it kind of looks unprofessional
(CUZ IM BAD AF AT MODELING) is there a better way?

So you tried micro variations ? in other aspects it also comes down to the texture if it really tileable, I would use some software like materialize to retile it properly and make it really seamless from above far away and from close up. I have no tiling problem. When retexturing I look so it does not have many elements that are like items on the texture that could make spots to be indentified on it, for example you got some green representing grass, you just leave the texture like that without adding other items on it in contrast, that will tile really bad. I also use chaneling on my texturing, all of them are channeled and learped at least once per channel. You got to mix textures and blend them with the channeling technique by lerping them on the channel. I would not even think of not channeling my textures in my material node.

believe or not, i understood 50% of what you said since im new to UE.
but wasn’t micro variation only used on landscapes only? plus i don’t know how to channel textures, can you show me how?
I’m also using megascan materials
I just wanna know how to use materials without making them look tiled even with variation nodes

Macro variation is in your starter pack, it has test materials there, you got an example there. It’s not just for the landscapes but for any mesh. Something like How to use MACRO VARIATION and prevent TEXTURE TILING | UE - YouTube

Channeling textures is easy, use a lerp node and in that node you got input of two textures, leave it like that and you blended them, channeling go’s a step further and adding one more thing to the lerp node , the alpha channel, you got to provide for the alpha channel a gray scale gradient image , or a black and white pattern image. People use noise, gradients, all sort of stuff on the channeling. This is advanced channeling. 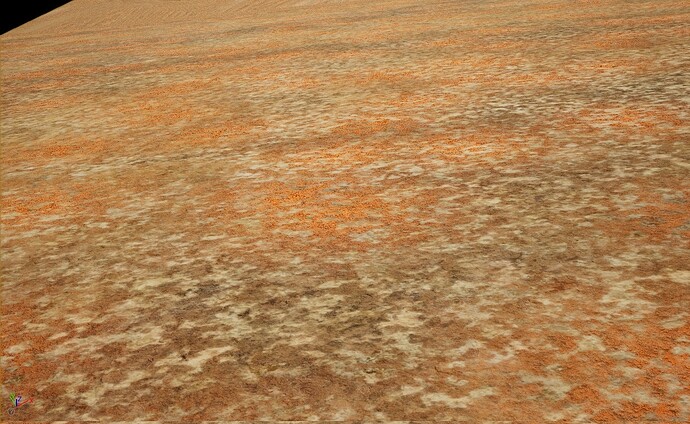 av1254×772 476 KB
Notice there is no tiling at all and I tiled the heck out of it but it is not tiled at all it would seem, but it is and the tiling is like 70000 per axis in some instances. Some gradients, some noise, some binary masks.

Start with a basic channeling to get the hang of it. 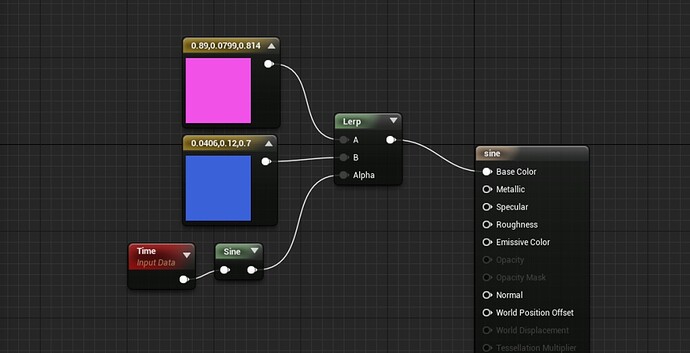 1024×525 147 KB
But use textures instead of colors and alpha channel erase that input it has and use a grayscale image to channel things on a pattern or something.
It’s not going to have that anyway, this image is from online and not mine, when you create the lerp node it is blank without any connections. You can tile all 3 textures as you work to see what results you get.

Third is to filter out the texture in other software and in unreal, adding vibration to merge with other stuff, tweeking intensity , there are many things, and using a software to tile the image more seamless at the end on it’s own as first step before using it in unreal.

literally perfect, But does tessellation work fine or do I have to do extra steps?

I’ve made this so far. 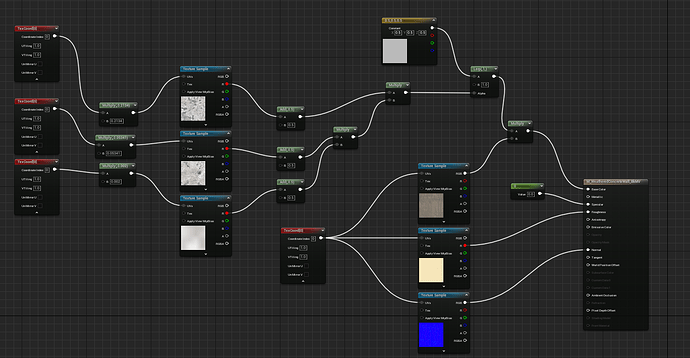 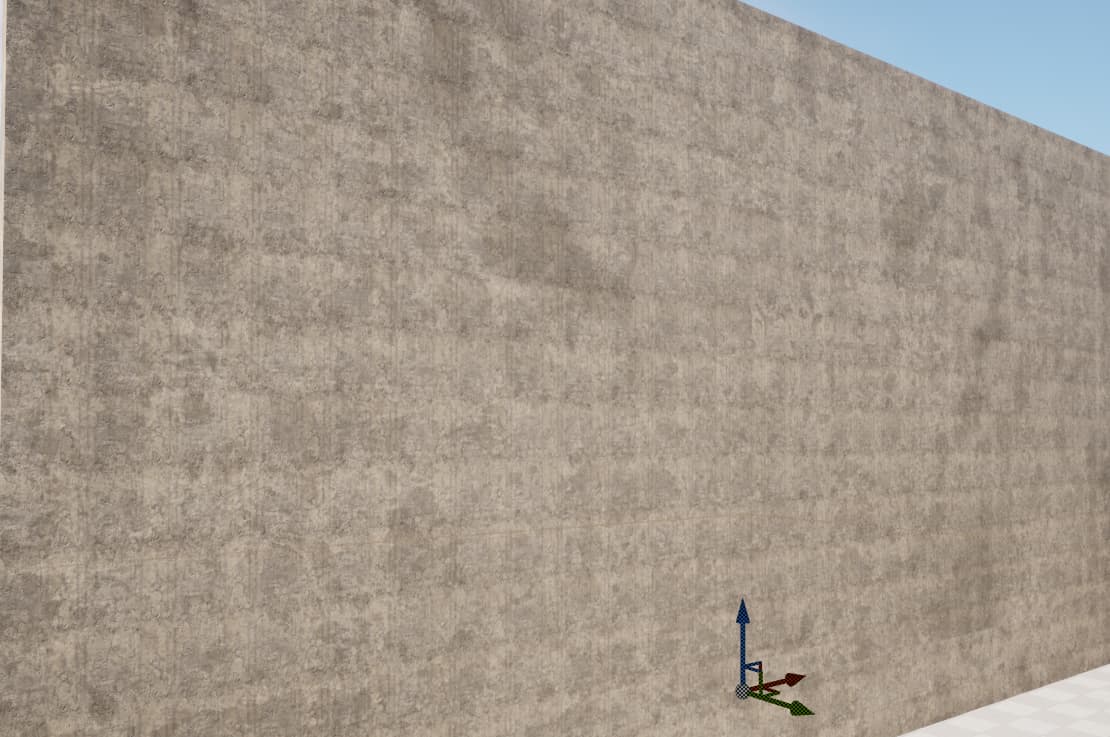 I can see why. You don’t have linear interpolation lerp node, those are add nodes.
Just get rid of everything and just connect to the first node for starters, forget the normals and all that, you can add them as last step after you create a lerped texturing patern that connects to the first pin “base color” Take two textures, a lerp node and a noise pattern image like grainy one that is black and white and connect it into the alpha channel of the lerp node. Now connect in a and b two different textures, in the sample texture pin for all 3 textures connect a texcord but you don’t need the add inbetween the texcoord and the texture sampler.

The A and B node can be populated with the same texture for starters, so for texture sampler have each sampler hold the same texture, but now on the tex coord one is more tiled the other is less tiled.

You can have as many lerp nodes as you desire one going inside the other for channeling multiple textures, what you see above is a combination of 5 textures there that I posted just to make a terrain.

As for teselation it will work with lerped nodes directly but I’m not pro tesselation, I do manually everything in C++ 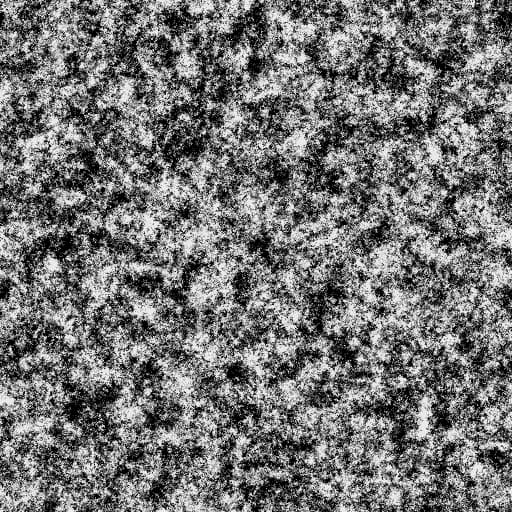 Grainy 10 - 512x512512×512 95 KB
Use this for your alpha channel on the lerp node, on your sample texture and also have texcord on it to tile it like you want. Node A and B use the same texture but with different tiling output, or two different textures, don’t forget to add texcoords to them also, just play with the texcoords to see how it changes.

Here I used two different textures with the most basic setup.
Texcoords on them are 10 by 10 each for each texture and on the alpha I use a texcoords of 3 by 3. 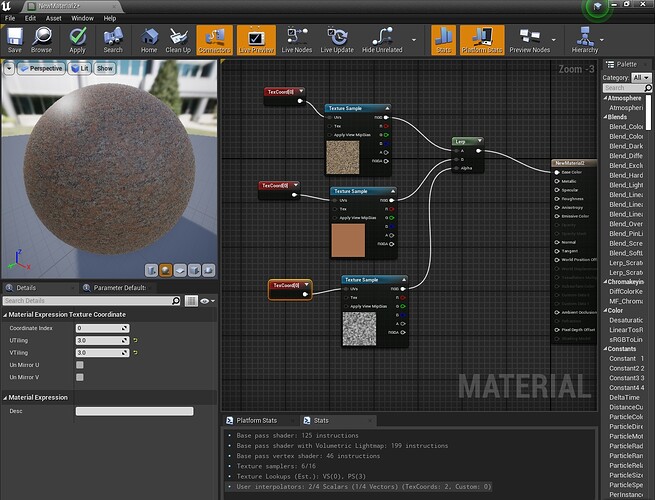 and the effect on a cube, this is the material on a cube. 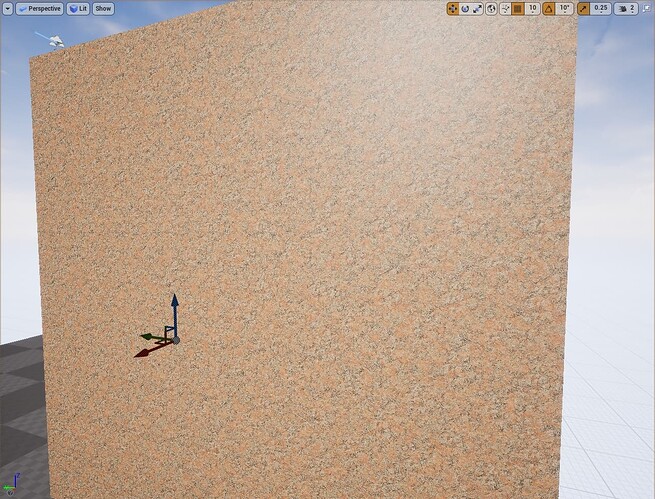 This is just simple channeling, as you can see with just a simple form the tiling is almost gone, it’s almost non present, I did not use micro or macro variations on it.

There is complex channeling once you get the hang of it, you can do all sort of crazy stuff. After you optimize your textures use variations and channel it a few times there won’t be any tiling effect.

thank you so much, you helped me a lot and im confused

I feel so dumb

hmmm ?
you got the material, I posted an image with it

hahaha never mind I did what you did now I understand but I made a small mistake that made my texture look something…
that’s why I was confused
THANKS FOR HELPING THE POOR FELLOW IDIOT ME.
You’re such a legend

Here is what i did to satisfy myself with the variations i want. 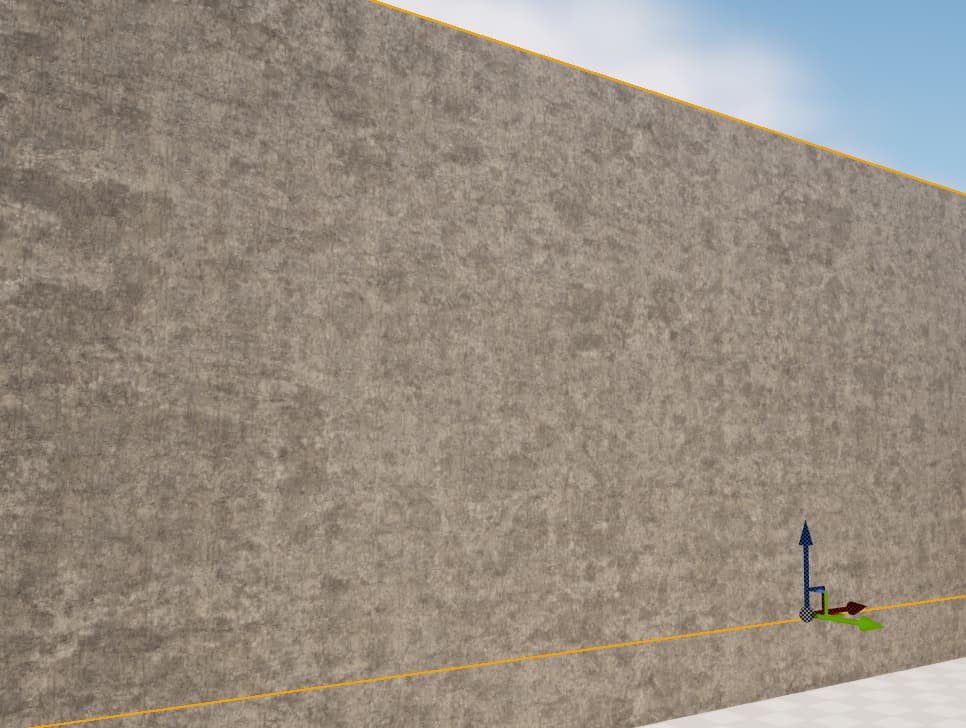 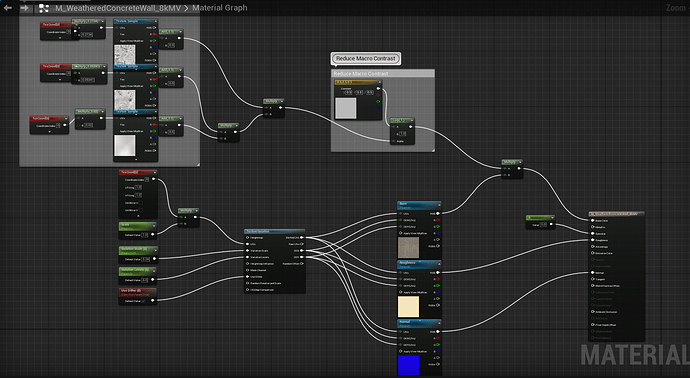 Looks good, don’t forget to use the lerp also with your variation.