How to stream two levels from HUD?

I currently have my Blueprints set up so when the character/player overlaps with a trigger volume it will load the second level. This works perfectly using: 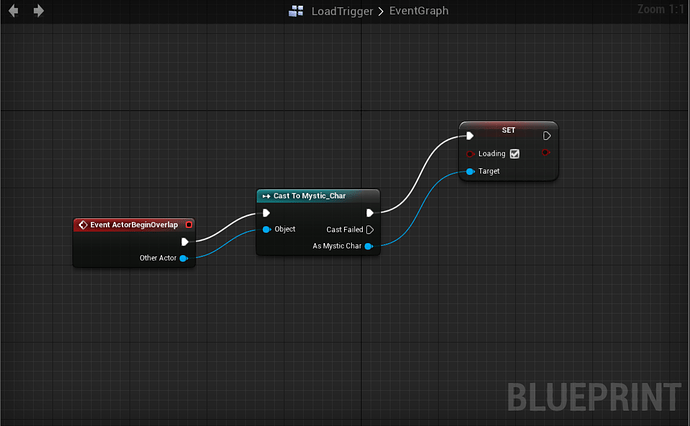 However, I’m having difficulties loading level 3. I can’t duplicate it all and then change the variables etc, this doesn’t work. How can I spiral off here to let me load a different level? 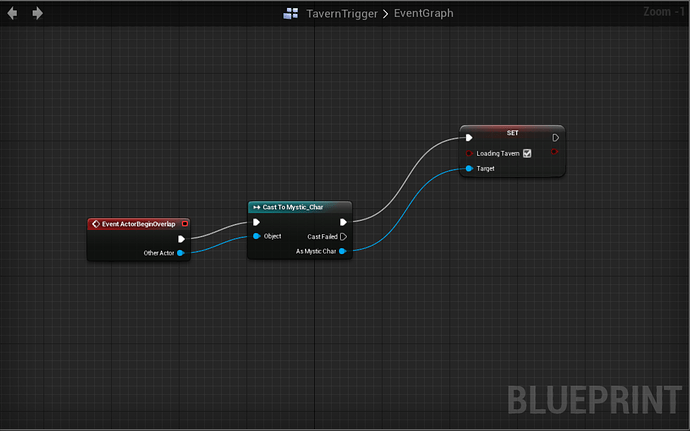 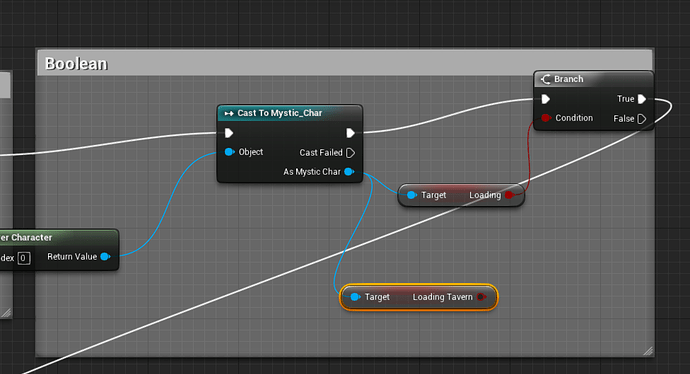 PS: Sorry if this has already been answered, I have looked around but didn’t find an answer.

Going your way, you simply add another branch, and then on ‘Loading == FALSE’ input it to the second branch (with Loading Tavern connected) and if the second is TRUE then do similar thing you did previously, but type there different level.

I’d do it differently but let’s not over complicate, from my understanding all you really need is just a basic bool logic.

I can’t get this to work. Having something connected to false makes the game and engine immediately crash when I try to run it. And I can’t have another branch node as only one can be connected

Then paste the crash. It’s not crashing because something is simply connected, it means you’re connecting something that breaks the game - ie. load level that does not exist (shouldn’t crash but who knows).

Could you post a picture of what you changed and how does it look when it crashes? I mean the node connections.

If you don’t want to make another branch, you can make this variable an enum instead. Make an Enum in the content, give it several values like ‘LoadingMain’, ‘LoadingTavern’ etc. and then switch based on that.

I don’t get an error message, it just goes non responding and closes

I have started again and seem to have this.

However, how do I get the bool var in the trigger to work with the HUD? I can’t find it.

I put it there so I can draw to hud a loading screen material.

It is in the blueprint which is why I’m confused as to why it won’t appear.

Why are you being so hostile? I’m clearly knew at this…

That much I’ve figured after the first post and decided to try helping you. If you really believe that what I’ve written is hostile then I’m sorry to break it to you, but I’m not. I’ve just asked honest and straightforward questions that I thought may help narrow the issue down.

And since you ignored most of them I can’t really help as much as I wished I could. But let’s not derail too much.

If I wanted to fake a loading screen through BP’s then I’d make a widget that covers whole screen and simply turn it on/off when needed. One variable, no need to override default HUD, no need to cast to character. All you need to do is store the reference to this single widget somewhere (let’s say Player Controller) and control it each time anything loads.

The trigger will know what level it streams, but the widget does not have to, unless you have several different loading screens for each level. If so, then you’d pass an int that would be ID of the loading screen you wish to show.