How to set view blend between two cameras within the character blueprint?

Hey guys I’ve been having lots of trouble trying to figure out a way to blend a first-person to third-person transition within blueprint. After player input, the blueprint runs through a flip-flop and then uses the Set View Target with Blend function. Flip-flop B (the return to first-person view) works perfectly fine and sets the new target to self. However flip-flop A sets the new target to a child actor that contains a camera (this is where the problem is). At the moment when I press “V” to change perspective, it goes to the center of the player character instead of the third-person camera. Any help would be greatly appreciated 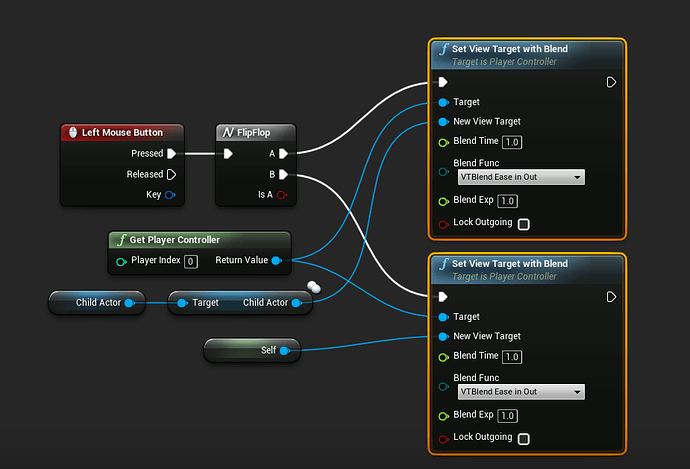 It works well until you interrupt the interpolation, that is. You will get much more control over the movement if you either:

vInterp To or Timeline + Lerp combo will both work nicely here.

I’m having the same problems as OP and your solution did not work for me. As you’ve described, “Blending to Child Actor Component’s Actor will send the camera to that actor’s component’s location” is exactly the common issue. I’ve been looking for a solution for this for the last few hours and it seems to be consistent, everyone struggles with this. Camera still goes to the belt/body of the player.

I disagree. I’ve used this method successfully in more than one project. Admittedly, I did not use it with a character, but with a regular actor. I might have a look later to see what’s goiong on there.

What are you using it for? The view blend is pretty simplistic, in many cases you’re better off with manual interpolation between camera locations, or even better, a timeline lerp.

@Limewax: Tested it, and it works absolutely fine with a character.

Camera still goes to the belt/body of
the player.

Can you show how the camera is set up on the player?

Edit: Discovered the culprit for my problem was that I had some conflicting stuff set up in the level blueprint. Removed that garbage and used what OP mentioned, everything worked properly immediately.

Not entirely sure if this is what you want, but here is how I have it set up.

So is it working now?

I do not understand your camera setup - the secondary camera should be in the child actor.