How to set default value of DateTime Struct?

Which version are you working in?

So I have a similar experience as you do. During my time searching why that is I found this on AnswerHub where someone describes in a fashion how to manipulate DateTime https://answers.unrealengine.com/questions/124364/keeping-track-of-playtime.html

Hope it helps otherwise I would need to know what you would like to achieve by setting this to a higher value.

I know this way to manipulate the DateTime, but it does only work for short periods of time. I need to set my time to something like January 1. 1200, it’s a medieval game and I want to show the Date

This issue just popped up in my list, so I’m not sure how it was overlooked but I apologize.

Testing this in 4.7.3, it appears to no longer be an issue. I’m able to set the default of a variable of type DateTime within the struct.

To update a struct value, use the “Set members in StructName” node, where “StructName” is the name of your structure. You can then get a reference to the Struct and set its DateTime member variable with a DateTime variable in the BP. Currently, there’s a bug in 4.7.3 that does crashes the editor if there’s a DateTime variable in a Blueprint, but it’s integrated into 4.7.4 (and should be available in the latest 4.7 branch if you’re building from GitHub).

You don’t have to apologize, I just moved this question to Bug Reports recently

It will be the name of your struct instead of “DateTime.” So if your struct with the DateTime variable is named “DateTimeStruct,” you would search for the node called, “Set members in DateTimeStruct.” If you search only for “Set members in” in the context menu, you should see every struct in your project show up as an option and you can simply select the correct one. 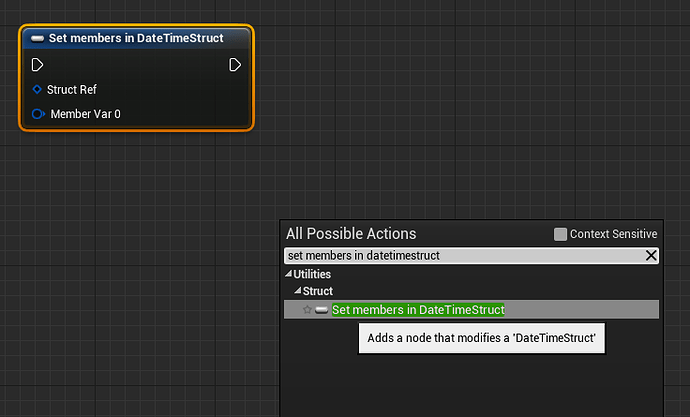 It’s possible you’ll need to compile/save the struct again before it shows up in the menu. I’m not sure whether that’s a bug or I just forgot to do it, but that happened to me once. I’ll be looking into that separately.

I’m looking into this now. The build I had from GitHub was old and the fix for the DateTime variable crash wasn’t included, so it’ll take a bit to build current. I’ll let you know how to set this up once I have everything up to date.

Okay, just double checked in the latest 4.7, and setting the default for a DateTime variable does work (it doesn’t reset when compiling), and having one in your BP no longer crashes the editor. As for setting one during runtime, it looks like that’s not actually possible. I’m going to enter a feature request for that, and I’ll let you know what the developers say when they get to it.

Ah, okay, that looks like a separate issue. FDateTime isn’t correctly formatted by the string converter when using any dates before January 1st, 1970, so using the As Date Time nodes to print the DateTime variable won’t work for anything before then. The ICU based string formatter converts the FDateTime to a unix timestamp, which is then formatted as a string. January 1st 1970, is when the Unix epoch starts, thus the limitation.

I’ve entered a bug report for that (UE-13006) and I’ll let you know when I see an update. Thanks for the report!