/Yo, hello, before we started i very sorry for my language, english is not my native language./

For a month I decided that I wanted to make my own indie game using blueprints. It’s all in the planning stage right now. I really want the game to be with a minimum of bugs and with good optimization. The game will be a simple but complete project, that’s my goal.

Actually, I have a question how to optimize something. I have a slightly unusual camera and I need help. Below I will tell my plan with screenshots and video.

At the moment, this is all implemented in a crutch (poorly optimized): when the player passes the trigger box, EventBeginOverlap calls a function, that writes a empty actor and passes its coordinates(location) to the camera blueprint. After this camera starts moving to new location (the same location as that new empty object): 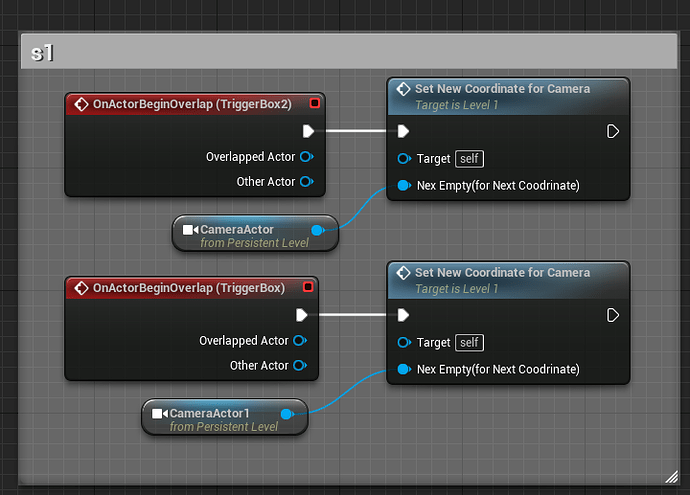 Below I am attaching links to a small piece of Last Campfire gameplay. and a link of video of my implementation. I would be grateful for any ideas how to optimize this whole process. Please help the newbie make a good, playable game, not a buggy crutch craft (we all started with this, right?)

When the player overlaps one, the BP itself tells the camera to move to its viewpoint.

You can either make the collision box adjustable as a BP parameter or the BP can have a reference to a box in the level. Same with the viewpoint. You can have a viewpoint in the BP, and make it’s position moveable by a vector widget, or again, you can have a very simple BP that just marks a position, and refer to it from you main BP. Sometimes its just easier to move objects around, then set vector 3D widgets.

Cant understand how i have idea about function in level blueprint, but didnt have idea about BP, which have a box and coordinates inside. Thats really great idea, big thank you, really simple, but really cool!
I think it almost can answer my question. Maybe someone else can suggest some other ideas. Will be great, if i have a lot of versions how to solve camera problem. But right now your idea looks so sеxy, big thank to you!

No worries. Tell me if you have any problems.

Well, looks like no more ideas. Okay, we found a solution.