How to print a string using an NPC's Blueprint?

I bound the button E to interact for an NPC, but it seems that using Interact doesn’t even print a string if I put it inside the NPC’s graph. I need to put it there because I will later add a begin overlap event and add actual ui. But I need to make it so simple inputs will work when used inside the NPC’s blueprints: 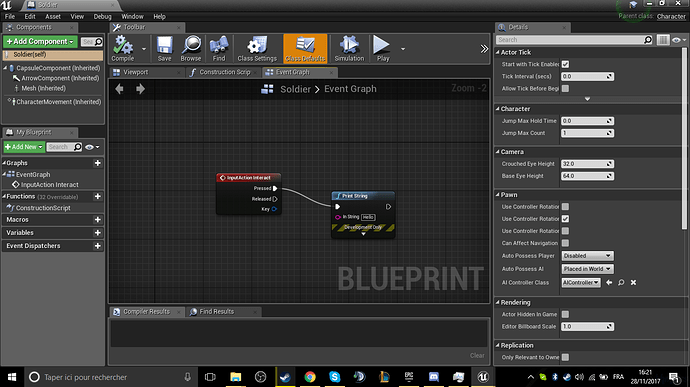 It probably has to do with the Blueprint’s settings, but I can’t find the correct one.

Create a CustomEvent in the NPC and call it on the NPC to make it perform an action.

How do I do that?

For that to work you have to enable Input on that NPC. But thats a Bad approach. Instead make your Character perform the Interaction Action. Decide from there who you want to Interact with (multiple ways, up to you) and call a Event on your NPC. You probably want to Interact with different things in different ways at some Point and its a good Idea to Setup a Interface for that so you can Call it on anything that Implements that Interface and let the one who Implements decide what should happen. Just to give you a Idea you (character) Interact with NPC´s, Chests, Doors, Leavers, etc. but all those things do something different when you tell them that you Interact with them (they decide what happens not your Character).

Good Luck and have Fun =)