How to play animation when player clicks an actor?

I already have the animation ready, i just don’t know how to play it when player clicks a cube.

Oh wow, i will try that tomorrow, i will inform if it worked because I’m going to sleep now.

You would have to do something like this then. 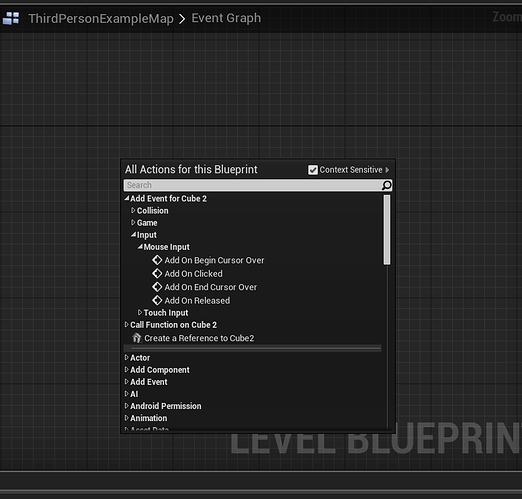 You should do this in 2 steps. Firstly, create an intractable area into your cube BP Like a sphere, in which your character will be able to interact with the cube. Then just share a variable between your cube BP and your character one, thanks to the “get play controller” and “cast to third person ch” nodes. Then if your character is in the collision box/sphere, you should use an input event. On press, just check if your character is in the collision box, if true, set another variable to true like “play animation”, and then you can cast it from your anim BP. You’ll just have to get it in there and to use it as a transition to a new state, which will play your interaction animation. Let me know if it helps

Thanks, it worked! Now, is it possible to play the animation when player points on the cube and clicks E?

Thanks, it worked but i prefer Thompson’s method.

That’s fine we are basically saying the same thing haha As for your other question, yes you can. You need to have a line trace running, break the hit result, check if the hit actor is the cube and if yes allow E keyboard event to play the animation. So E would have to be hooked up to a branch node that checks if the out hit actor is the cube if true play animation otherwise do nothing.