How to make material emit light?

I need help making my materials emit light. It’s a paranorama background for a game/cutscene, so I need it to be similar to the HDRI plugin. thanks.

It doesn’t seem to affect anything around the area, will this still show shaders?

I need some help I’m not too familiar with the nodes, could you please record a video for me? Thank you.

go through the beginner courses on the learning portal

It’d be a lot easier if the names of the nodes were specified, I’ve gone through tutorials and nothing has helped. 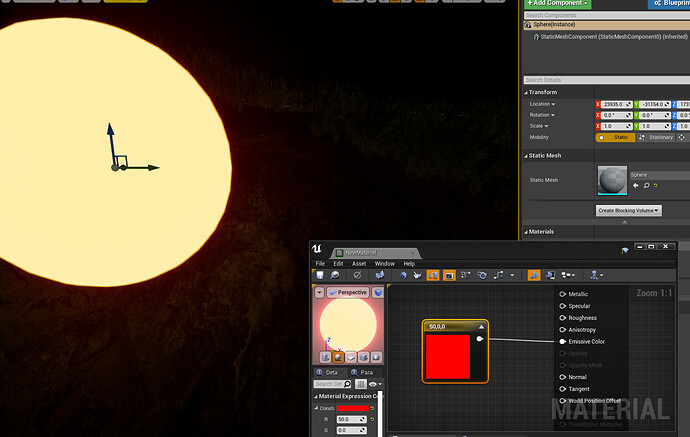 I don’t know why it’s not working for me, I’ve plugged in everything right and it still doesn’t light up the room. Also for clarification I’m using an image with this as well.

Just add a skylight; you probably don’t even need an emissive material. Use the Sky_Sphere blueprint in the Engine Content as a reference.

Emissive light on a material doesn’t shine light into a room. You should consider using a point light with a light function for that.

“Emissive light on a material doesn’t shine light into a room. You should consider using a point light with a light function for that.”

“don’t know why it’s not working for me, I’ve plugged in everything right and it still doesn’t light up the room. Also for clarification I’m using an image with this as well.”

Emissive isn’t a light-light per-se, you want to use an actual light to make things visible. In 426 emissive is more like ‘color-bleed’, but it does cast a (weak/sickly) light at lower values, vs what you get from an actual point-light or the like. in UE5, Emissive seems to work better as a light-source within Lumen, but still not a replacement for an actual light-light.

If you want influence on the scene, emissive can help, else if you are looking to illuminate, light things up, use an actual light.

I see. I was mistaken.

What I’m trying to do is emulate the light emitted by the HDRI plugin background with my own mesh and material, however I have been struggling.

Unsure I can help at that level, I’ve not used that plugin nor know enough of the details on lighting to mimic that effect outside the plugin…

It’s okay! Thank you for the help anyway

There’s a lot of confusion in this thread.

Unless… you’re using a GI solution that samples the scene color, like SSGI or Lumen in 5.0, or injects emissive into the GI like RTXGI(not RTGI, what UE4 comes with out of the box).

If you’re using static lighting, you can enable “Use Emissive for Static Light” on the mesh to bake the emissive contribution to the 2D and 3D lightmaps.

What you might be seeing if you crank up the emissive/exposure is the bloom, which is an additive effect and can give the impression of the surrounding area being lit, but it’s not.

The HDRI Backdrop plugin is no different than a regular skybox mesh, unlit material using an HDRI, and a skylight. It’s using an actual light source, not emissive lighting.

Right, so the HDRI is just a skylight essentially?

HDRIs and the Skylight are mutually exclusive. The Skylight just captures what’s in the scene, or takes the HDRI directly, and reprojects it for lighting. The only way to use an HDRI for lighting in Unreal is through the Skylight, but the Skylight can also use any of the atmospheric actors like ExponentionalHeightFog or SkyAtmosphere. So… they’re similar and benefit from each other, but not quite the same.