I have some invisible walls to hold the player in a track, but the AI can’t walk through it and they need to be able to. I tried for a bit tonight but could not seem to do it. It is two cubes that are part of an actor BP.

Make that the AI is some sort of other collision channel 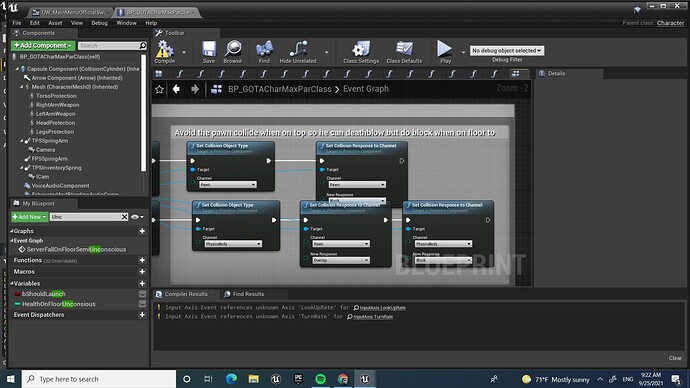 image1920×1080 153 KB
See in here they have new object type and do not collide with pawns that are state standing.

Yes, I think I see what you mean the top nodes are to disable collision so AI can walk through, and the bottom is to redo collision I guess on the floor?

While I have used cast before, in this instance I don’t know what to plug into this object pin to make it work. 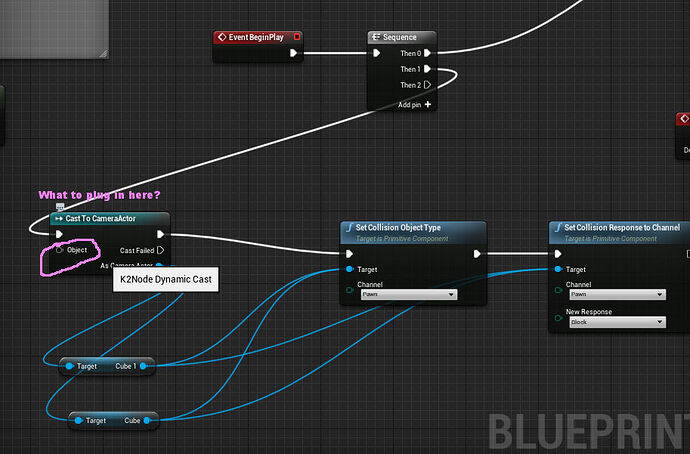 What I’m trying to do is disable collision on those two cubes FOR THE AI. I don’t have to mess with the floor or track. So I suppose get the AI’s capsule component to ignore those two cubes. So I guess the easiest or most efficient way to do that is what I’m looking into now.

I made some new custom collision channels. I set the cubes to a channel, and set the AI to channel, and chose for them to ignore each other and it still does not work. Any ideas? Thanks.

But what is your AI possessin/controlling ?
use the controlled pawn node and then set collision with object type, and use the components not the whole actor…

It has an ai controller yes, it can seek the player.

Ok I tried setting up those nodes, for “controlled pawn” the search revealed two results. I tried them both, got the two cube components, but if I don’t do a cast to the camera actor the cubes error.

– an image was here–

But anywho, I made another custom collision called ignore and chose ignore as its type when asked.
– an image was here –

Not sure what to do to fix these compile errors,

–an image was here –
I thought the cubes needed a cast else the target error.

Any help is appreciated thanks.

– @ Mods, I would appreciate it if this restriction below was lifted from my account. I have posted here for well over a year I think. Kind of hard to learn when I can’t convey information. 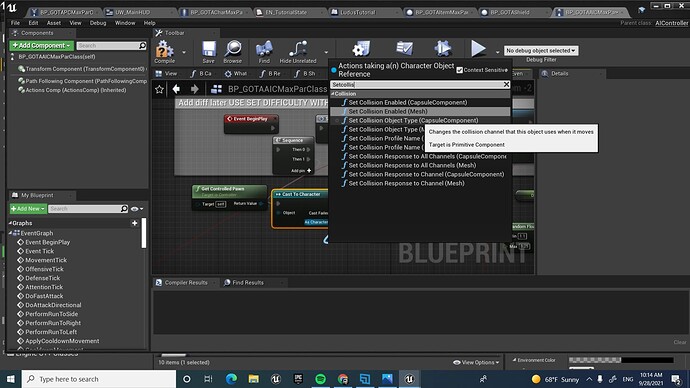 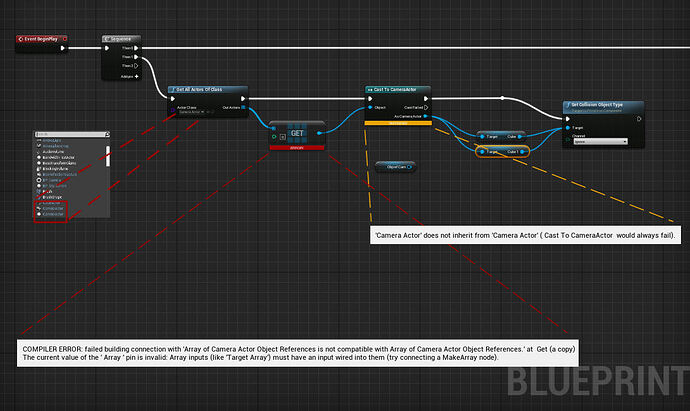 I have been using begin play, I do not understand why this does not work. The two cubes are components of the camera actor blueprint. In the “Get all actors of class” node I get two listings for camera actor, one is a small icon of a camera that I assume is the Camera actor bp dropped into the world, the other is simply a small white circle I assume is actually the bp itself.

I don’t understand what else I can do to access those two cubes, and turn off collision so that they (the cubes) do not block the AI, yet, block the player.

Any help is appreciated, thanks.

if there’s only one instance in world u don’t need to use get all actors of class, u can just use get actor of class which returns the first instance it founds. also u don’t need to cast cuz it will give u direct access to that blueprint

Thanks for that info, will remember that in the future.