How to make a particle systems Initial location affected by box size?

actor blueprint with a box component and a particle system in it.

i want the particles to spawn in the area of the box… so how do i change the particlesystems initial location with the box’s size??

If you take a look at the Effects map inside the Content Examples project, there are some examples in there that might be what you are looking for. Example 1.3 deals with Emitters Initial Location, you may also find useful section 2.2 on Global Vector Fields.

example 1.3 initial location is being determined by another particle emitter within the same system.

example 2.2 is a vector field placed in the editor and effect already spawned particles.

i want to make a particle systems location settings to be configurable from the outside in the editor.
so that one wall of fire can be custom length of 300 while others are only 30 by default… or i guess i could place 10 particle systems next to each other end to end to achieve the same goal…

i was just curious if there was a way. 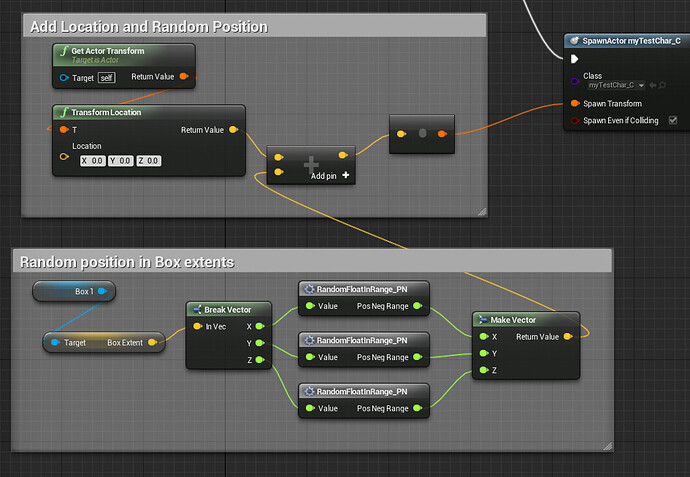 Box1 being a boxcomponent added to the actor

You will want to use a particleParameter with your initial position, then create a vector variable, and modify that parameter via your variable in your Blueprint.

Here’s a link to ParticleParameter info.

k i set a vector parameter, but i couldnt get it to spread based on that vector.

so i have a box component that when i scale it i want the particle system to increase the location spread with it.

but this method seemed to only allow me to define a single point for all particles to spawn.

Did you try using a timeline to change the vector values over time? This works if you set initialLocation to a constantCurve and animate that curve over time…so I expect it would work with a Blueprint.

Another method would be to setup a particle parameter on a shape location, and modify it in a similar manner. This I know works, check the images below.

Hope that helps you! 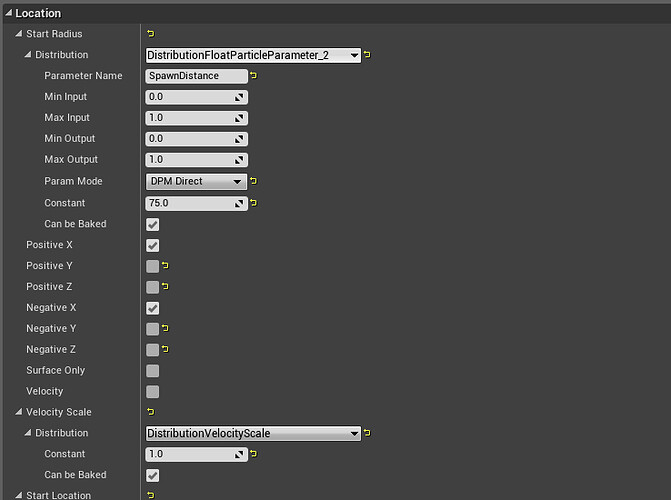 When searching for a topic, this link is in the first place, so I’ll post it here. If you need to have particles appearing in the volume of the box, you can use the World Offset Module. Set up start location distribution to vector uniform, then adjust the box boundaries. You can also enable visualization of the bounding box by checking 3DDraw Mode. In this way, you can set up the emitter in the form of a plane or box