How to make a ladder in the third person template?

I have tried multiple tutorials:

How to make a ladder with Blueprint?

This is totally possible using only Blueprint, and you won’t have to touch C++ at all. Sadly that is all the assistance that I can provide at the moment. If your question is still unanswered after a while, then I’ll try to create a sample Blueprint...

Hi Everybody, Just wanted to share my ladder volume tutorial with the community since I know it was something people were interested in. UE4BlueprintLadderTutorial.pdf Let me know what you think and I hope this helps a few of you out with you...

Edit - this happens on on 4.3 as well. Hello, I’m having an odd issue with the 4.3 preview, 4.2 this works just fine. I have a simple ladder climbing system which has a bool for isClimbing which is set on overlap of the ladder. and what it does is...

and none of them have worked.
what i am trying to do is make the character from the third person template climb up the ladder. he grabs onto it, but doesn’t climb up.
i do have some images 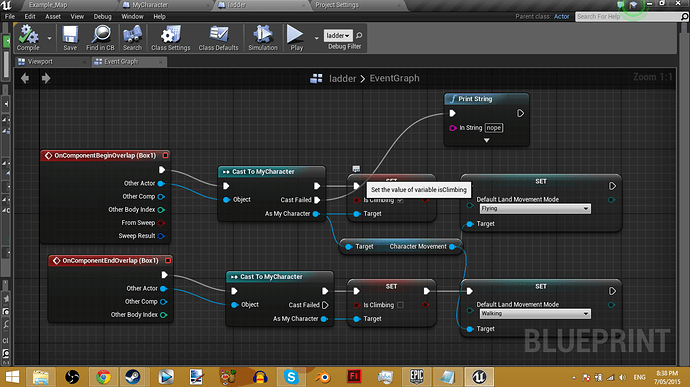 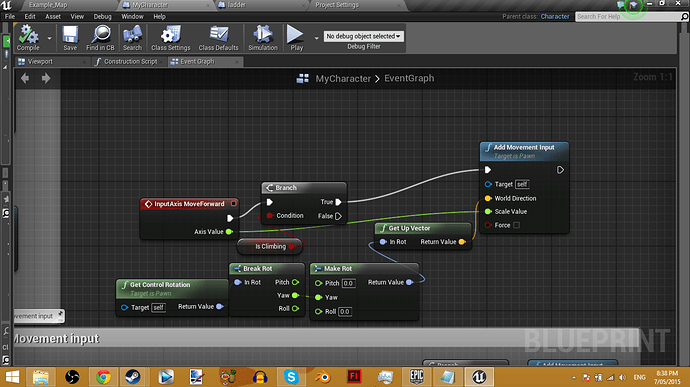 can i have some help please?

Because CharacterMovement mode need to be set by the “server”. So you need to call [SetMovementMode function][1]

EDIT
This is how movement should work on ladder

wasn’t quite what i was looking for, but at least it worked! thank you so much man! you are definitely going to be in the credits of my game!

actually, i found something. when i exit the ladder, the blueprint changes climbing to false, but the character is still flying. when i link the branch to another set movement which changes it to walking, but that still prevents gravity and also disables my ability to jump.

hey kheka, currently i’m trying to make a ladder in first person.
i tried your stuff, but it has some issues. the upmovement is ultra slow, even when scale value is multiplied by 10000 and the character always slips of the ladder sideways. is there a chance to restrict the movement to upvector in the flying ladder mode? and how would i fasten the upmovement?