How to make a component native without c++ knowledge

I just don’t know anything about c++ but I need a component to be native so I can change it in blueprints. any help?

Read this and if you have any questions, fire away. Nativizing Blueprints | Unreal Engine Documentation

That document explains how to do that. It’s specifically in this section (Exclusive nativization). Nativizing Blueprints | Unreal Engine Documentation.

Not sure you can do a specific component. But actor-level works (they say).

That’s not what nativization does. Nativization is purely a build-level performance boost.

I’m not exactly sure what you want. Is this your own component class or one built into the engine? In the details panel for the component, near the top, there is a checkbox that says “Editable when inherited”.

I think you may be trying to access a variable or function that is private to a standard component. There’s no way around that in blueprints. Private is private. If it’s just a protected item then you can use C++ to derive a class from that one and make access functions. But make sure there isn’t already an access function. Many internal variables have associated “get” functions. Fewer have “set” functions.

Maybe be specific about what you’re trying to do.

I think you should mark this as answered and open a new question. I don’t know the 2D part of UE4 very well. If you mention me in the new question (@Jin_VE), I’d be happy to try and help. But with a new question you would be more likely to get an answer from someone who does know 2D development.

If you are just trying to change/create a component using Blueprints, why you don’t create a Blueprint Actor Component? When you create a new blueprint, instead of choosing Actor, you choose Actor Component, as in the picture below: 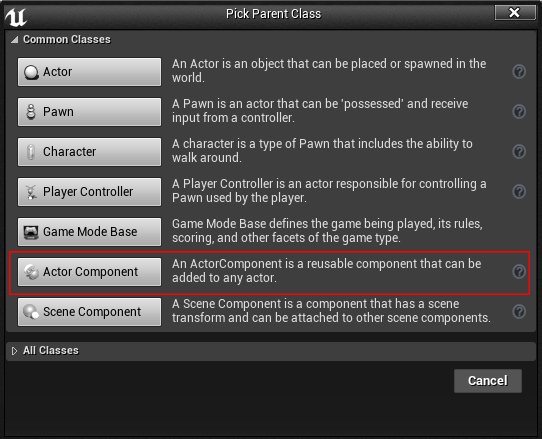 As a result, you have created a component that you can attach to other actors and that you can customize/program it in Blueprints.
In fact, you can inherit from any class (and for this I suggest you to become familiar with the Unreal Gameplay framework here Gameplay Framework | Unreal Engine Documentation ). Moreover, you can also inherit from the blueprints you create (you can have a look in the content example here 2.5 - Child Blueprints | Unreal Engine Documentation ).

On the other hand, if your question is: “I already have a component written in c++, and I want to modify it. How can I do it?” I would say that you can still inherit from it, and try to override the functions you want to change. However, to have a fine control over it, you need to learn c++, since there is no way to convert a c++ class into a blueprint one.

Hope this answers to your question.

how do you make a specific component native without the end package? for exemple if you open a blueprint and you want a certain component to be native, how do you go about it?

okay so I have this 2d character, right? so whenever you have a paper character it comes with 1 sprite, therefor its inherited from the c++ class. you can only change the flipbooks of inherited sprites : I want to had another sprite that’s identified as inherited.
BUT I donnt know a bleep about c++.

you the man dude its so simple forgot about it XD