How to lock cursor position while rotating camera?

Hello,
i did a small blueprint so i rotate the camera only when RMB is pressed.
Now i need to add something on RMB Output “Pressed” so my mouse will stay in the same location and rotate the camera.
I tried few things but the mouse is still moving and the camera rotation stops

Any ideas how to stop the cursor at the position where “RMB” was pressed but still be able to rotate the camera ?

I don’t know your exact code but this should steer you in the right direction. 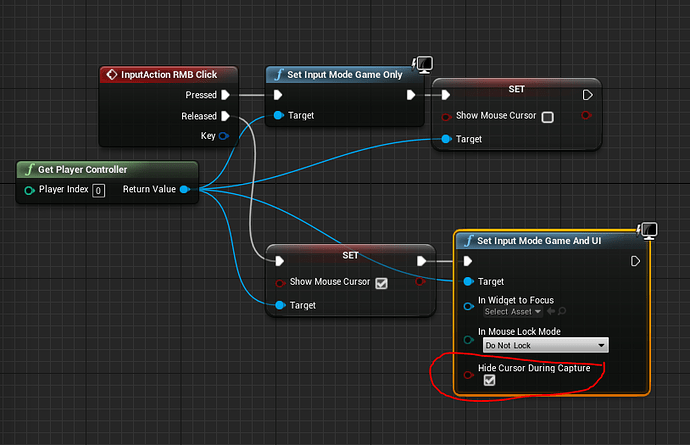 Namely the “Hide Cursor During Capture”.

This will function the way you have specified as long as the cursor is set to “shown” on release of the click as I have included in the process. Pay close attention to the input modes as well, it’s very useful to understand the differences between “Game Mode”, “Game and UI mode” and “UI mode”.

Note: In the case I provided the “Hide during mouse capture” is useless and not achieving anything. Sorry about that. But in any other case where game mode configs are different from this one, that is what it’s for.

I did it like this. So i can “rotate infinite” even when the cursor hits the windows edge. [Checked]
Now i need a solution that the mouse “Stops moving” when i press the right mouse button, but still allows rotating the camera.
I’m testing few things but can’t do it somehow. 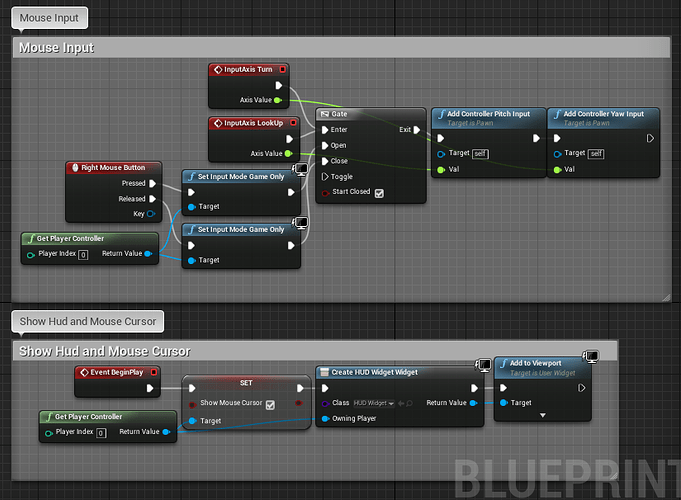 Still need help with it.

How about when you press rmb spawn a small kind of rotating widget and set cursor visibility off ?

This works. I don’t know if it bothers other right clicks functionality such as inventory or whatever, but