How to localize game audio

I am having some problems to get my game lenguage located,

Right now, it works fine with text changes, I generated the Spanish(native) and English game culture, and them I traduced the text gathered by the Localization Dashboard.

Them, I managed to switch between cultures using this function: FInternationalization::Get().SetCurrentCulture(lenguage);

But them I tried to localize game audio, I thougt that it was going to work just creating localized assets and switching between cultures, but actually it isnt working, and I haven´t seen any other post/question talking about it. 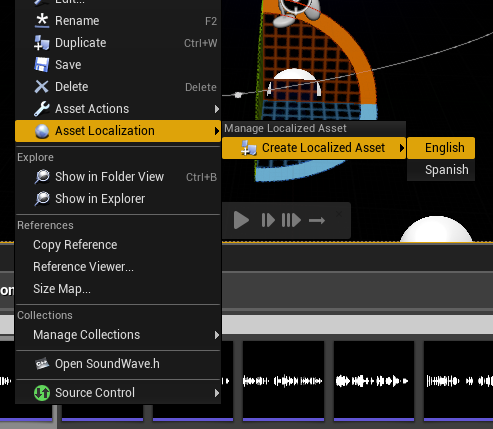 That created the L10N folder with a copy of the selected asset.

Does anyone knows how to get the localized game audio working properly?
Thanks in advance.

The asset localization for audio appears to only work if the game is launched in the desired culture, so adding “-culture=es-US” (or just “es” if you have an L10N/es folder and not L10N/es-US) to the command line should do it for you. Additionally, if you’re using a C++ project, adding the FInternationalization::Get().SetCurrentCulture(“es-US”) to your custom game instance’s PostInitProperties() function body also works, as this appears to happen prior to the asset loading.

I have a slightly different issue with this system, in that I need to be able to change the culture at runtime and get the correctly localized dialog and sound waves to play via my sound cues. I’ve read in an answer hub thread that I need to reload the assets in order for them to update to the localized versions, but I’m not exactly sure how to go about this. I could just create the sound cues in the other languages and load them manually when needed, but I was hoping the asset localization system would handle that for me.