How to jump over another character smoothly?

Hello,
You are colliding with a collision sphere of the character you are jumping over. If you open the blueprint for your character, switch to Viewport tab, select CapsuleComponent and under Rendering in details uncheck box for Hidden in Game. You will be able to see the outline of the collision capsule while playing.

What you could do is ignore collision for other pawn at all, so you character could fly/walk through other characters. 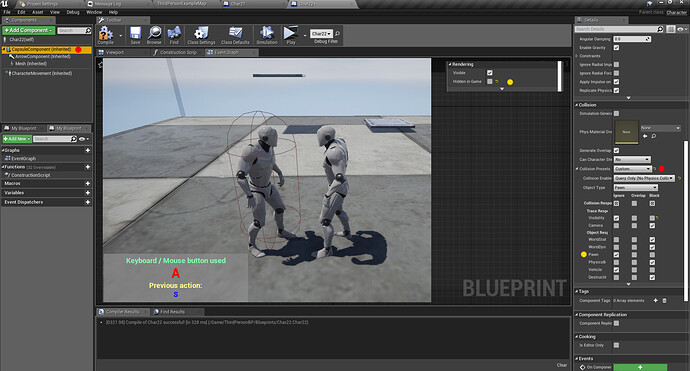 Hey DonBusso, thanks a lot for your response. Is it safe to scale the capsule component down a bit and make it thinner for a character? & would you recommend it?

Another thing, is it possible to set collision as complex? Similar to using a character’s mesh as collision. This is for a smoother transition. Just in case if I have one char jumping over another.

I be completely honest I am not expert and I didn’t really played with collision that much. I would say play around with it as it’s a tricky component to me. Just be careful so your character doesn’t drop through the floor to the abyss.

Problem right now is the collision capsule is way above the character. I suppose you could disable the collision on the capsule for other character so they can talk through character, then maybe play with a collision settings on the mesh itself so you would only collide with the actual body.

Interesting. Thanks again for the advice.