How to implement Events strictly on C++ side?

I’ve been transforming my blueprint implemented game prototype to a strict C++ implementation because of several important reasons.

From what I understand Functions and Events are very different concepts in Unreal.

Events are basically threads which does not have a return value and can execute latent functions like delay.

Functions on the other hand does not fork like events and continue executing on the main thread of the caller.

I have the below two questions:

To implement Events strictly on C++ which one is the correct way to go?

I am totally confused about this issue and I will appreciate any help I could get.

I would like to clarify my question with an example…

I would like to implement a damage effect on the player. Whenever the player takes damage the camera should fade in to red, delay a little bit and do some computations there and fade out again. This is very easy to do in blueprint editor (just a single event which contains 3-4 nodes some of which are latent)

But on C++ side how can this be achieved? There are a number of answers in the forum which suggests to use timers instead of calling latent functions from the C++ side. But this will be very cumbersome. Such an approach requires me to break the function into three separate functions and link these functions to the timer events each. So for each latent call I would require a new function even if I use the same timer. This would populate my classes with a lot of functions for each latent process similar to the example above… and would make things really hard to manage.

If I can declare the method that will be used by an event/thread on C++ side and if I make sure that it is a separate thread (not the main thread) calling it, I feel that it should be possible to achieve this on C++ side.

Could this be achieved?

If so how should this be implemented on C++? With a BlueprintNativeEvent function with no return type? Or perhaps an Event delegate bound to a UFUNCTION in C++.

Thanks again for answers…

Since there are no answers to this question yet I’ve decided to write a TestActor which tests if BlueprintNativeEvents (or in general blueprint events) act as threads or not.

My findings are very strange…

Here is the header for the actor: 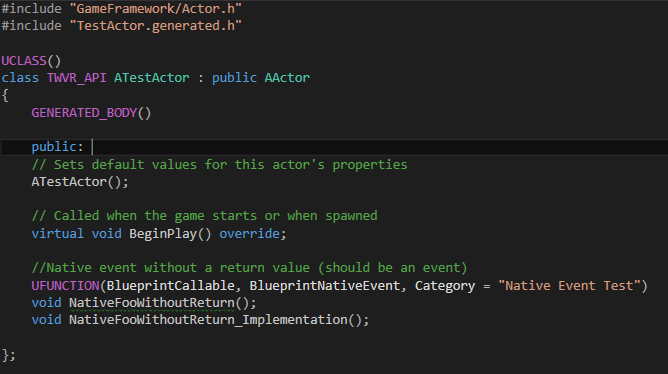 The basic idea is to see if the call to NativeFooWithoutReturn() method blocks the execution at beginPlay (and hence also the game). I calculated the time difference to see how long this block takes place.

Surprisingly this case also blocked the game and the editor. So that means the NativeFooWithoutReturn event is not a separate thread but still running on the main execution thread.

I want to make an off topic note here as well. The BeginPlay() method on C++ side reported around 2 seconds of delay in this case. However the same code for the C++ only implementation of the NativeFooWithoutReturn function is handled in less than 0.01 seconds. That means around 200 times slow down for the editor compared to pure C++ implementation (one more reason to go for C++).

Now here comes the case which will blow your mind off!

I’ve added a latent delay node to the Editor implementation. And Kaboom! suddenly NativeFooWithoutReturn() becomes a thread. The C++ BeginPlay() reports 0 second delay and the game does not freeze. Also the ordering of the log messages change in this case as BeginPlay() on C++ prints both the messages and exits right away…

So the result of this trial is that Blueprint Events are not separate threads. They do execute on the main execution thread unless you put some latent nodes (with clock sign on top-right corner) to it (like Delay, Camera Fade methods etc.)

The result is the same as above and the delegate function call also blocked the game and the editor together. That means even if you use function delegates all execution is still handled within a single master execution thread by Unreal Engine.

So it seems the only way to solve my original problem is to implement a thread mechanism by myself or to use timers etc.

Therefore I answered my own question.

Thanks a lot about this Issue ! I just want to know about how to implemente “delay” while you let me have a deep thought about threads and Event functions.It help me a lot!
I appreciate if you get some new solutions of this issue.About threads or Event etc…
I am Chinese and myEnglish is not very good.So is there any mistakes of my words ,please forgive me. Thank you!

So what is your solution about your issue. Are you really create a seperate thread by youself?

whats more,Some fimiliar nodes like “tImeline” even “sequencer” are also relavant with this issue(the thread).So I hope your new opinions about these issue.