How to hide walls like Diablo and other ARPG games?

I have just started using Unreal Engine and have made a couple of small projects following tutorials and lessons. I have just started work on my first real project a top down arpg like diablo/path of exile etc. But i have come to a problem, i cant seem to work out how to make the walls disappear (or cut in half like diablo) i have looked at some posts regarding this subject online and tried following some YouTube videos but they are all nearly 5 years old or they don’t seem to function correctly anymore.

There was a nice live training on this. let me see if I can fish it up. 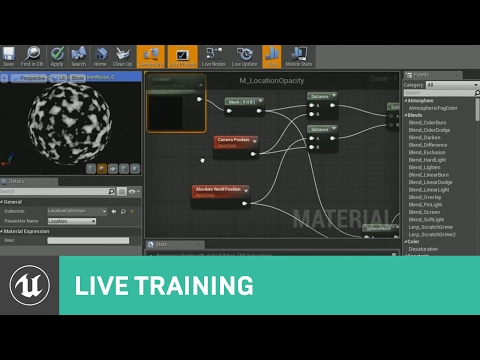 There was a nice live training on this. let me see if I can fish it up.https://youtube.com/watch?v=GXbE0IqbA7w[/QUOTE]

I am following his video but at this point https://youtu.be/GXbE0IqbA7w?t=746 he adds two items with i am guessing key binds but i don’t know what he presses, hes talking about opacity but all of the opacity nodes i tried do not look like what he is adding.

Sorry i am a complete beginner trying to learn as i go so if this is something very obvious, apologies.

Oh. To enable the opacity mask all you need to do is change the material type from opaque to Maqked.
to get to it click on nothing / the final material.

I have finished his tutorial and have come upon some problems. I get the small circle which i can re adjust as i need but for some reason i am getting another area that is becoming see through as you can see from the images.

I think it is probably to do with him using a third person camera and me using a top down camera but i am unsure how to fix it. i have linked the blueprint i have used also.

Also if it is an easier fix in the video he mentioned it would be simple to do the diablo style cut the wall in half by saying if the object is larger than a set number of pixels to make anything above that opaque but i am unsure on how to do that.

Any advice would be a huge help.

Sure.
So, the sphere mask is what creates the sphere like effect around the specific point.

The reason you get artifacts is just that… it is calculated as a 3d sphere. Which may or may not be affecting geometry further out.

To get a different effect you can use a different mask. To do that you would need some more knowledge of how materials work. It isn’t immediate.

As an alternative. Laryan’s best game yet, Divinity 2. Had a very interesting fade effect based on either vertex of the mesh or a 2d mask that created the view hole while adding in some extra cool effect to the visual.
Also less intensive since you slap it on the base materials as a function and you won’t need to mess around with splitting up meshes for the ceiling/wall etc.

So, TLDR. Make a circle with the outside black and the inside white, plug it into the final lerp, and see what it looks like…