How to have player grab a bone (for a rope)?

I have a rope made of bones and want the player to be able to grab one of the bones and so when they move they drag the rope with them. This must also work with one end of the rope being constrained to a static location. My current attempt was to have a constraint on my player and when I run my function I’d use set constrained components to constrain the rope bone to my (for testing) gun bone on the default FPS character. This however makes the rope freak out and the bone I select stretch all the way to (0,0,0).
NOTE: I have another question about bones on here but it is a separate issue.

Have you tried using the Cable Component Plugin? Depending on what you’re trying to achieve, the plugin has a lot of functionality that you may find useful, such as attaching one end of a rope to a character and another to a static mesh.

A breakdown of the Cable Component.

Dose the bone have an attach point such as an arrow for example?

I thought about using that but I don’t think it will work for my needs. I just need to figure how I can interact with bones on my rope mesh invidually. So the bone I’m holding can be grabbed and moved and using physics drag the other bones with it.

I’m not sure what you mean.

Don’t use the bones directly, create sockets on the rope and attach the character to the socket or the rope socket to the hand socket depending on how you need it to work.

To tackle the hanging first. I use this setup. It’s quick and messy and just handling the player attatching to a specific bone for now. First I set the players location to the bones location. Then I attach using AttachToComponent. This more or less works. But it does stop all control input to player and I don’t see why that happens even if it is useful in this context. Basd on what you said about sockets I went to the skeleton tree and right clicked all the bones and added sockets like this. 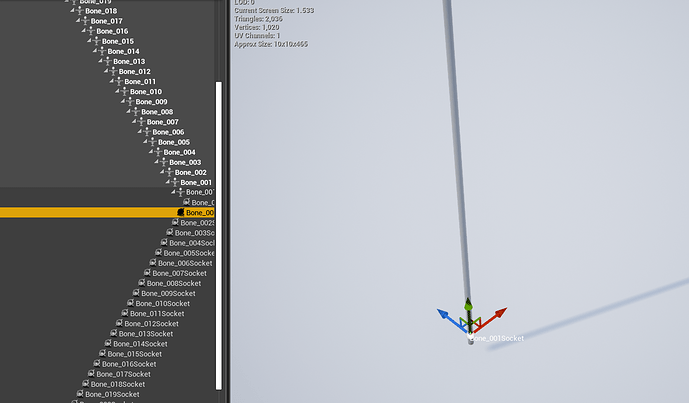 Then changed my BP to this. 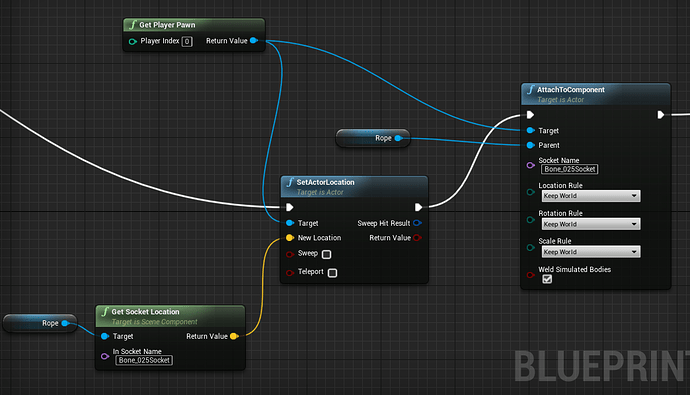 Which worked differently. It still locks my player movement but my player fell all the way to the floor rather than hanging with the bone.