How to get vehicles to flip and roll better from jumps?

Is there a certain setting I can change to have better gta style physics when I’m going off of ramps instead of how it is now? It just clunkily rolls and the center of mass or something is making it not great

Is there a way to like change the location of the center of mass or anything else to affect this? It seems like when the car rolls its rolling around a point thats on the bottom floor of the car, so in mid air and when crashing from a jump it rolls based off this point,

Instead it should be flipping and rolling from a point thats located inside the middle of the whole body, Im not sure if this makes sense, but is there a way to fix what I’m talking about?

With the stock example vehicle, when I’m jumping off of a ramp it doesnt seem to roll or have proper physics like gta cars do. It does roll and land upside down sometimes, but its not really smooth and arcadey and it just seems kind of bad, I read through teglegs thread called “horrible car physics” and it was interesting, but I also remember that APB:Reloaded had pretty good physics for doing jumps and the car would have smooth weight & roll in mid-air nicely like GTA, and that game was made with unreal 3.

the centre of mass issues are kind of fixed in 4.6 but as you’ve seen in teglegs thread UE4’s vehicles unfortunately aren’t that good yet, and yeah UE3’s vehicle system is better then UE4’s in my opinion.

Thanks for the reply,
Driving on ground seems decent , its just going off jumps and the mid air / coming down and crashing / weird rolls that are disappointing,

Couldn’t there be a way to shift the center of mass or have weight properly distributed throughout the whole body instead of the floor of the car behaving sort of like a magnet when riding off into the air?
Or would that require doing traces to tell when the front wheels have stopped making contact with the ground and is pretty complicated?

How can I check out the new and improved version? Just get the 4.6 preview from the loader and the vehicle files off github? Hopefully it is better, and hopefully it will become alot more polished because I know alot of people have land vehicles in their project

Driving on ground seems decent , its just going off jumps and the mid air / coming down and crashing / weird rolls that are disappointing

you can get cars driving ok on the ground and going off jumps and being in mid air isn’t as bad in 4.6 but the crashing and rolls are still not good (you can make crashing a little better by messing with the PhysMat).

there is a way to shift the centre of mass, in the vehicle BP there is the setting “COM offset” that allows you to change it but its buggy in previous versions of the engine, there is 2 places where it can be set witch can cause issues.

How can I check out the new and improved version? Just get the 4.6 preview from the loader and the vehicle files off github?

you can either download the UE4.6 preview from the launcher or github. you don’t need to download the vehicle samples, you can create them as a new project from the engine.

Hopefully it is better

I am with you on that, so many games use vehicles they really need to fix them.

I downloaded the 4.6 preview from the launcher and made a new vehicle project but it still seems pretty bad when coming off of a jump, the floor of the car is still behaving like a magnet where its not rolling around a point from the middle of the center of mass of the whole car in the air, it still rolls based off a point of the floor of the car

Or is it fixed in a newer version thats not in the launcher and I have to manually get it off github?

I noticed the center of mass values have been enabled though so I can change the xyz values but I’m not sure if that helps, I tried putting in different values for each axis but it doesnt seem to change how the rolls when coming off of a ramp in the air it still seems to be rotating around the floor of the car and not around the center
Unless there are specific values I should try for the com offset?

I replied to your post on AnswerHub as well but I am not sure if this fix made it into 4.6 preview (it should have though, it was added a while ago), but it should be in the GitHub version, here is some more info on that from Ori.

You can adjust the COM from the defaults panel of the blueprint like this: 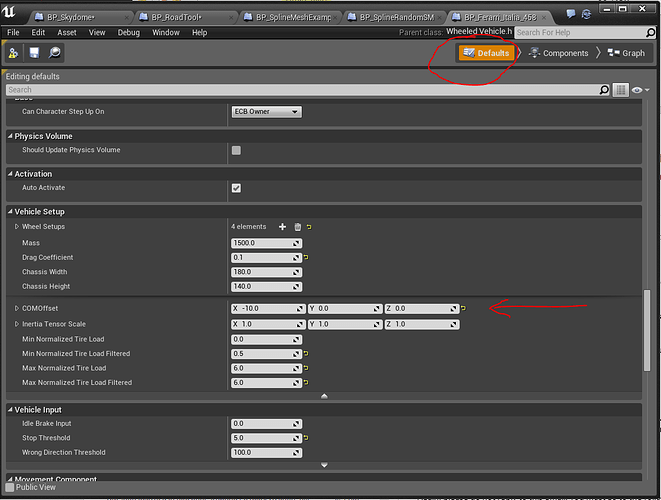 This is an image from the 4.5.1 build so it might be slightly different, but try adjusting the Z-axis (bottom to top) up a bit and the X-axis (back to front) forwards or backwards depending on the way the car is rolling, see if that helps.

Thanks that seemed to help a little bit, its still no where near as good as Edys vehicle physics in Unity,
and doesnt seem roll well at all once you land its very clunky and odd still

Must I configure the com manually everytime I do a different kind of jump? How would that be feasible in a game where you never know which way the car is going to roll and which kind of jump you will do?

Have you guys checked out Edys vehicle physics for unity? It has amazing car physics, try the sedan out and jump off a ramp,
but yet it says it uses physx as well so physx cant be whats holding this quality back for ue4 right?

we have the attention of the developers in this thread
https://forums.unrealengine.com/showthread.php?48843-Horrible-Car-Physics
if you could report your findings there it might help them narrow down the problem(s)