How to get rotation of Arrow component?

I have followed this tutorial: https://docs.unrealengine.com/latest/INT/Engine/Blueprints/QuickStart/7/index.html and I am on the On Your Own section trying to get the arrow component to define the direction in which the player is launched into the air from the launch pad.

I tried using “GetWorldRotation”, but this is in World Space and it just teleported my character to weird locations. What’s the best way to get the rotation of the arrow and times it by the scalar launchVelocity variable I made, and then apply that vector to the LaunchCharacter function?

When I used GetWorldRotation it teleported my character to a place far away from the launch pad.

I had this problem as well. Just get the forward vector instead and multiply it by the scalar and it will work.

do you mind explaining yourself with this? I’m looking at doing the same thing with getting the forward vector…

thank you, Spennet! you helped a lot!

Thank you Spennet and PowerGamesStudios for this very helpful thread!

Thank you so much for sharing your knowledge! 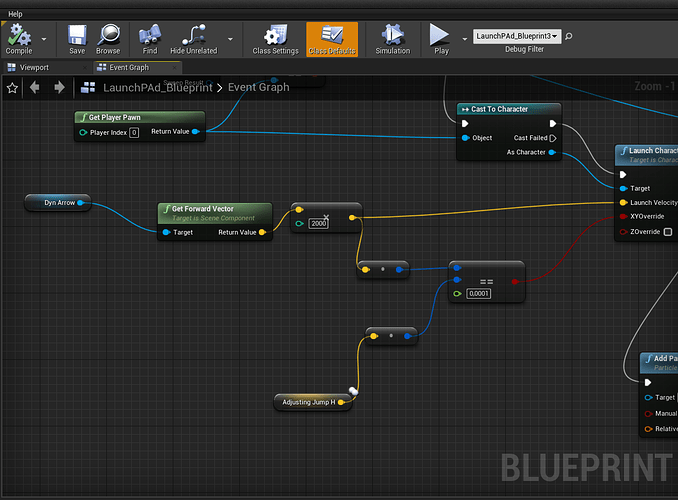 I’ve made this version of applying arrow component in order to save previous step, where you are required to customize Lauch velocity by Z. Please have a look if it’s done right. Imo it works within the level.