How to get a programmer

good day unreal engine developers, I require assistance in that for this past year i have been working on creating my own game, but I have no experience with coding and blueprinting all i can do are 3d assets and textures and sounds, time and time again i have posted multiple adds on discord hoping a bored programmer sees it and hops onboard but after a year of trying i actually have no more ideas as to where I’m gonna get one without proper funding , my question with all of this is how do i actually get my game in the works of being made if I don’t really have anything to actually hire programmers, etc. , i know there is like patreon and all but , if people see my ad and don’t wanna work on the game, why would people send money to game they cant play yet?

I don’t think you will ever find a “bored programmer”.
What you might find is a programmer that needs 3d assets, textures and sound to complete their project so you might be able to barter some assets for programming.

hmm well ill be honest i have never thought of that , that could work I shall try it out and if I come right ill update the post, thank you very much man . any other ideas are welcomed aswell

where could you say would be a good place to offer my art assets for a trade, will I have to messege individual people asking each one if they willing to do a trade?

Blueprints are pretty easy, I highly suggest you take a class on udemy.

I am bored programmer, however i have laundry list of which project i would join. So bear with me, and lets hope my rant will give you insight into complicated souls of programmers:

So i no particular order things that i consider about (NOT) joining projects:

And last that is not so important as stuff above:

So i hope my rant will give you some thoughts.

Well I’ll be damned if this is not the most well defined and explained answer I have ever seen , so basically I would or should do things like make a post on the forum of my game with all the details like the gdd , eg. Background, character, lore and everything down till the type of level of VFX used or the smallest detail , then obviously get a programmer for each section as you beautifully described it ,then set up a workspace/source control for unreal like perforce or something, and well I suppose all I can really do is continue to make 3d assets and textures and sounds for the game , but otherwise I am going to try to put what you said to to work and see what happens

For royalty or just free for fun projects:
Project must be small enough to be doable by team you want or can assemble.
Huge projects demoralize team very fast i have been in few such projects, besides learning they al l were waste of time.

And if you post your models etc, make programmer believe you can do awesome and preety things, programmers envy good artists.

Right okay so let me do that , I shall create a post for my game where I update it on content and assets created aswell as every aspect of the game displayed with reference work aswell , I will lower my ambitiousness for the sake of getting programmers to join , and try create a more simplistic idea! Thanks a ton man! Keep a look out on the forums for my game I’ll be posting by lots of updates it will be interesting to see your words out to work

Think about recruiting now for “vertical slice” of your project. or minimal amount of features that would show how your game should be.

Then when you achieve this stage you can always create new recruitment for next stage, get more people and let old members leave without feeling bad about abandoning you.

Yoh that’s quite hectic I must say

Do this post/topic, but also create few “reserved for future updates” empty posts, there is limit of how big first post may be, and you will need more space in future. So few empty slots reserved for it is not bad idea. And gl.

https://forums.unrealengine.com/t/dark-revelations-dark-rev-massively-online-solo-tps-wargame/268374/2
for those people who are watching this thread

Good job on the post, gives a fair bit of required detail.
However, the project is over-scoped IMO. You’re basically wanting to make a Battlefield game, which is something like 1000+ man-years each, for the incremental updates in new settings.

hmmm well i am not gonna lie you are right when you said im trying to make a battlefield type game, I suppose the only thing i can do is maby like lower the player count, and especially if the game is being built off a template im sure it would be possible, i dont want to prance around like i know anything cuz i actually dont so any feedback will be fantastic as im not to sure how to actually solve that issue you just mentioned, thanks for the feed back aswell skogg

Well your issue right now is you don’t know what you don’t know. How can you scope out a game when you have no intuition for how complex a certain mechanic or feature actually might be?

I think the best start for you would be to pick up a random course on Udemy and just get through it, see what the implementation of really basic features involves. You would then have a much better understanding of what further development, or similar pieces of work would require too. Linking a few below as examples, but I’m not affiliated with Udemy, not have I taken these courses. 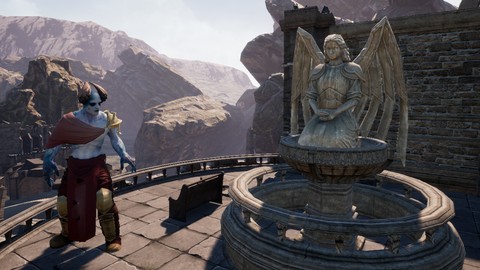 Create three complete video games including a mobile game without a single line of code! 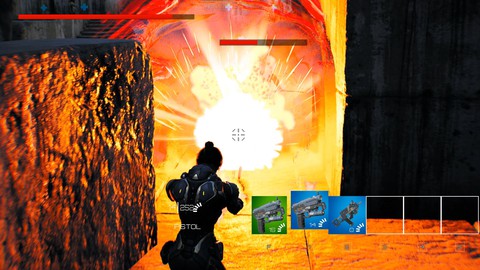 Yes good job on the post.
However I am now going to tell you what you probably don’t want to hear.

Pick the features that you want the most and let the rest go. You are inspired by Warhammer 40k so mechs you probably want to keep but you might want to scrap Melee combat and all the vehicles could be hovering avoiding the need for wheels and tracks.

The best game features are often created out of necessity of having to simplify things in order to make a manageable project.

Hyper-realism is also a tall order. It doesn’t take much for hyper-realism to look really bad if the animation doesn’t support the visuals. A simple art style is much easier to animate since you can get away with much more “game like” animations.

This is your first project so keep it simple or it will never be anywhere near finished. Look at this project as an investment in your future project that can have a bigger scope.

I had hope that your project will be not THAT big, but it is even bigger.

My biggest worry about big projects is that as indie you will never finish it in time.

Project like this requires years of man labor work to be done.
Hard truth is that you need to finish it before njext generation fo graphics, hardware and software comes out. I would say that it is 5 years for next gen, and about 10 years for next next gen. So in 5 years game will be just fine (Average of all other games), in 10 years it will be “a bit outdated”. I seen this happened to project i joined, those folks did second job after real job just to finish it, it was their dream, they did everything they could and all that was just barely enough. And scope of their game was 1/10th of yours.

That is why i wrote “doable in one year” because i know there are ALWAYS delays. With this you are aiming at 10 years at best. Just look how long Cyberpuk (or Mass Effect Andromeda) were in development and how many people they had. Where you put single programmer in they had teams or 20 or more people. You cannot do more with less people, they all are already milked beyond any sane limits in those AAA corporations.

Just minimize scope of your game, then minimize again. Think about current (after you minimize everything) game as research project and aim to accumulate some funding, for real game after you finish this one. You can also introduce new trademark/setting story to market. Going all out on first project probably will just end in disaster.

ps.
for anything “massively online” you need team of few engineers to setup backend services and hardware, also few programmers (that are not unreal, but C++/python/golang etc.) to develop server side code and functionality), also some $$$ for actual servers.

Place pieces of candy from the coders basement that make a line leading to a cage.
Add a trap that closes the cage when the coder eats the candy inside the cage.
???
Profit!

(Apologies, but I just had to when reading the title :p)