How to fix: "Set Reloading Pistol" was pruned because its exec pin is not connected

God. I’ve been trying to figure out this for five days now and I can’t seem to get it. Apparently this means that my variable set reloading pistol is not defined in my state machine because the connected value is not available. So I think the solution is to have something before the branch connected to its exec but I have no idea what I can put that doesn’t have an exec pin before (like a custom event for example). Ill try to put as many screenshots as I can. 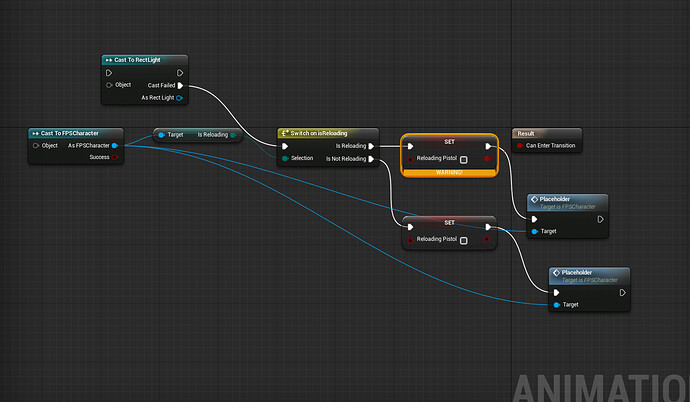 I have another problem where I don’t know how to do movement in different directions, but that’s for another day. I don’t care about that as much as the reload animation. 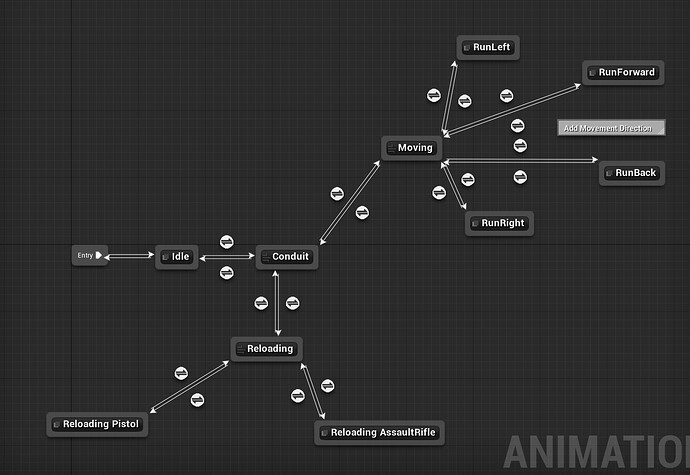 I am a noob to the engine, so keep that in mind before you bash me for being an idiot. In two and a half weeks I’ve actually learned a lot its just that this is irritating me SO MUCH that I have to fix it before I go into AI or anything really that im interested in getting good at.

Moving it up can someone please tell me

Animation graphs don’t use exec pins, so you can’t use any node that has an exec pin. The reason the warning is showing up on the set node is because it’s connected to the result.

then how do I make it so it detects if the character is reloading and reloads based on that? doesn’t matter if I have to scrap all this, I just want to know how to do this.

For movement, just recreate the ThirdPerson Template’s animation system. For the reloading, you need to set a boolean variable to match the value of the character blueprint’s variable. Make sure to do this in the Event Graph! As for the rest, check this tutorial out: https://youtu.be/PWHu4DPs4j4?t=142

You set the variable in the event graph of the animation blueprint (which should get its values from the owning pawn) and then get it in the animation graph. Like jmancoder said, use the ThirdPerson Template as an example.