How to enable the Profiler Tool?

Hey, I need to test my game’s performance,So I looked on the wiki to enable the profiler so I can do tests

But it didnt work for me, when I click on Windows->Developer Tools->Session Frontend, All I see is this: 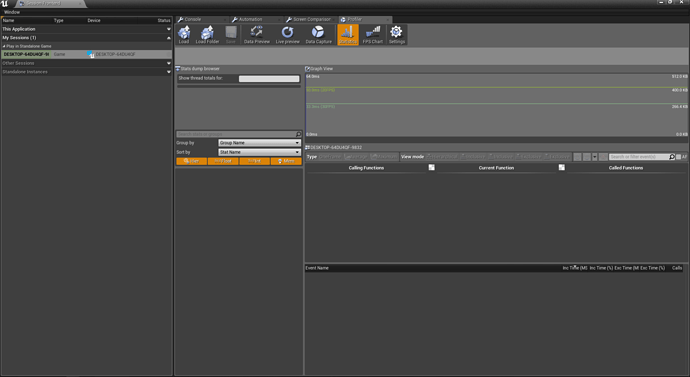 What is going on, what am I doing wrong?

What do you mean with “wiki”? There are 2 methods described in the documentation, did you check them out and eventually tell what went wrong?

Yes, thats the page, i looked into.
The one I tried is the Live Connection, it says run the game with parameter - messaging
Which I dont understand? How am I supposed to do that?

Sorry, thought the commands to start and end the Profiler were also shown. Well, to start the Profiler just type “stat startfile” in the console and to stop “stat stopfile”. After that just Load the file from Project/Saved/Profiling. <3

But this shows the previously loaded data? Can I not use the profiler and look at the data as I play?

After you used “stat startfile” you can activate Data Preview and Live Preview, but usually it’s enough to get a first look with “stat SceneRendering” or “stat Game”. There is Editor overhead with the Preview, so if you want the exact numbers it’s recommend to record without editor overhead in a packaged build.