How to create .xcodeproj for PC started project

I started my project on PC as “Development editor”, “Win64”. I clone the project folder to the mac, but there’s no .xcodeproj file to open this up for xcoder. I want to build this project to IOS divices. Thank You, Mike

There is a File named ‘GenerateProjectFiles.sh’ in UnrealEngine/Engine/Build/BatchFiles/Mac ; you can use it for generating xcode project.

you can find more information Here

I’m very new to the Mac. Can you tell me how to run the “GenerateProjectFiles.sh” file? And is this going to create a .xcodeproj file within my game project file? Im trying to open my PC game project on the Mac to create an iOS device game. Thanks, Mike

I installed using the source files,and Built the engine. Thanks for your help. The official documentation has been very hard to follow. My friend will be doing the C++ programming. I’m trying to learn the Mac side of things for the packaging and deploying.

Do you have Apple Developer Account ? it is required for iOS publishing. even for testing game on your own iPhone!

i recommend you to install Unreal Engine Launcher and download “Tappy Chicken” sample from Marketplace,then try to deploy it on your device.

Yes, I have a developer account, and was able to deploy Tappy Bird to my iPad. I was lost when I couldn’t access my PC started project–using Xcode.

To create the ProjectName.xcodeproj file, you can right click your .uproject > Services > Generate Xcode Project.

I can’t get this to work.
I typed, “CMD+ terminal” and it said command not found.

Can you tell me exactly what to type to setup the “GenerateProjectFiles.sh”?
I can’t get this to work. I typed, “CMD+ terminal” and it said command not found.

I opened the terminal found in the Utilities. Is that correct?

Im not sure on a mac what the correct path should be. Can someone help me out? Thanks

“To create the ProjectName.xcodeproj file, you can right click your .uproject > Services > Generate Xcode Project.”

this solution will work, only if you’d installed the engine via unreal launcher! 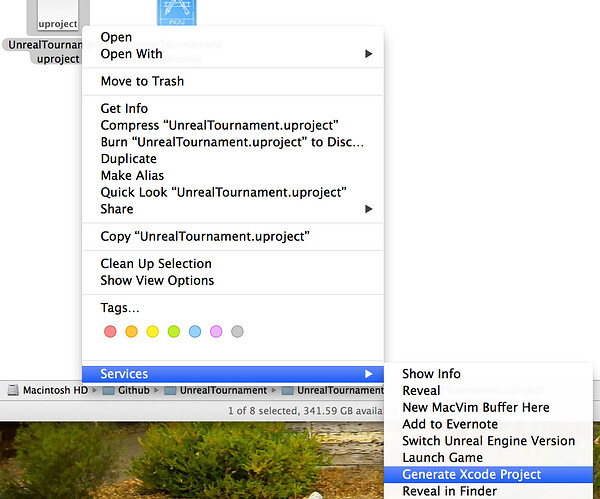 I did click on generate Xcode project, but nothing was created and nothing seemed to happen. A Xcode file was not found anywhere in my game project file. It should create the file in the game project folder–right?

I installed the engine via the installer and the source files. So both are on my Mac.

Sorry for missing that part mcmike953. Now with the Binary build installed as well, were you able to create the xcodeproj file?