How to create a Ledge Climb/Grab blueprint??

I’m extremely new to UE4 and would like to learn how to do this but there’s no tutorials at all that I can follow along without going “where and why do I use that node?” And no buying an already made one and seeing what’s there won’t help at all. I want to learn what those nodes do… not just how that particular instance is put together. So is anyone willing to make a tutorial on it? Would be VERY much appreciated!

There are probably tutorials out there … you would have to probably search.

Not sure why you are against buying a blueprint kit … this is one of the ways I have learnt tons and I have supported my fellow developers in the process. I actually bought a pack this weekend and found a good way of not doing something.

So I don’t think you should knock that option just yet. Failing that … try a “Google” search for “ue4 ledge climbing” … I found quite a few links there.

I’ve already searched through at least 40 pages on Google… meaning I’m never going to find one… and I’m new to UE4 so I don’t understand why some nodes are there and why they’re used for that purpose and so on. I’m only against it because I KNOW I’m not going to learn anything from it. because I’ve tried someone’s free version of it and I had no idea what the hell I was doing. That’s all

… meaning I’m never going to find one… and I’m new to UE4 so I don’t understand why some nodes are there and why they’re used for that purpose and so on.

Well then the problem is not the ledge climbing system but the fact that you are not understanding the basics of Unreal Engine first.

My suggestion is to first go through all the basic tutorials: Samples & Tutorials

This will give you the grounding you need in order for you to understand the free ledge climbing one you found or the purchased one if you ever decide to go that route. You need to learn to crawl before you can walk … or walk before you can run … whichever you prefer. 8-}

hence why I’m asking for a tutorial on this. so I can kill two birds with one stone. :3 since I’m going to be implementing it in my game. and that free one wasn’t actually a finished one and I’d want to make it from scratch without having the blueprint already made since I’d just give up and take the blueprint.

not to mention that i find that it’d be a waste of time doing tutorials that aren’t beneficial to what I’m needing at the moment… even if I can learn from it. I’m not attached to it meaning I’m not properly going to learn from it. shrug AND that those tutorials use half of what’s there and I’d be lost with the rest D:

All righty then … good luck with your endeavors …

… not sure waiting for someone to do a tutorial is the smartest choice … when you have all the tools to try and do it yourself. But anyway. Good luck with it.

There are several threads on this subject on this forum just search for ledgegrab/ledgeclimg.
Waithing for a tutorail would most likely not be the way to go about learning. go to youtube and search for wall climb i know there is a good video and it is on of the methods for setting up a ledgeclimb system you will have to make some changes and continue from where the video lets off but it should get you some of the way

There are tutorials.
I reckon qdelphece made a good point. Your understanding of the engine needs improvement. I implemented a wall run and wall climb system in a few hours after reading the threads about ledge climbing on the forums here.

You should break down what you want your ledge climb/grab system to actually do. Do you want to just grab specific ledges? If so you should probably go with pre placed objects that holds all the information you need, that way you only need to get the information from the pre placed objects. It all depends on what scope you got for your ledge climb, you could make it as simple as possible or as complex as you want.

so no one can actually just put up a general layout in picture or video form, since the ‘tutorials’ on here don’t even specify which object/collision they’re using when making their BP…

As others have stated, do some basic tutorials and learn how to use blueprints properly and then you will understand the example’s and other tutorials around there enough to finish what you are requiring. If you just request a finished example of exactly what you want to achieve all the time then you wont actually learn anything. Give things a try, fail, then try again, then post some of your results up here and ask for specific help where you are having problems and you will get much more assistance.

I’m not requesting a finished example. I’m requesting a step by step to know what to use and where to use it. and I’ve tried already to 0 avail I’ve tried using a trace and for it to print when a collision is hitting a wall and NOTHING HAPPENS. I’m currently learning 0 as is… so a step by step would be better for me. I wouldn’t ask if I didn’t think it was necessary. :s

Numerous members have posted that you probably need to learn the basics first … because if you understood the basics you would understand or be able to debug why your trace is not working.

We are not trying to be deliberately obtuse or pig headed, we are actually trying to point you back the basic fundamentals of the engine in order for you to not get frustrated.

Having said that, we can only offer advice, it is up to you to use it or not. Good luck with it.

This should mean that whenever my collision hits something, “Hello” should popup on my screen… right? Because nothing’s happening and I’m not sure what to do at all…

This is exactly my point … you have failed to grasp the basics.

What is the context of that blueprint?
Is it in the Player Controller, the Character, the Game Mode … some other arbitrary Blueprint.

Everyone here will try there best to help you if they can, but posting a one node blueprint without context is not going to help us help you. The documentation clearly states: OnComponentHit

Event called when a component hits (or is hit by) something solid. This could happen due to things like Character movement, using Set Location with ‘sweep’ enabled, or physics simulation. For events when objects overlap (e.g. walking into a trigger) see the ‘Overlap’ event.

For collisions during physics simulation to generate hit events, ‘Simulation Generates Hit Events’ must be enabled for this component

So no … you are not going to see Hello because you are using the wrong node.

Seriously? we’re talking about Ledge climbing… So that would mean tracing. what else would you use the collision for? So that would be in the Character BP. And Yes I should see Hello because the collision is hitting the world geometry/static meshes. AND yes I’ve used Kismet before… If you want a picture of the whole thing here.

And if it IS the wrong node… Which node should I be using for the capsule collision to hit the world geometry/static meshes and then to process that… btw I’m going off this BP >.>

EDIT: I fixed it. I didn’t know that you have to actually change whether the collision accepts all collision or not… >.> In UE3 it just does. BTW no tutorial has covered doing this. (At least not that I’ve seen)

Use a line trace or box trace in front of your character that goes off tick.

See the point of trying something for a while and figuring out the answer?

You may want to start with something a lot simpler than doing ledge climbing, that’s why we all suggested easier tutorials so that you understand the basics of developing with UE4. There are dozens of tutorials that will all touch on collision.

There are probably tutorials out there … you would have to probably search.

Not sure why you are against buying a blueprint kit … this is one of the ways I have learnt tons and I have supported my fellow developers in the process. I actually bought a pack this weekend and found a good way of not doing something.

So I don’t think you should knock that option just yet. Failing that … try a “Google” search for “ue4 ledge climbing” … I found quite a few links there.

WOW! BTW I GOT here trying to find a option for climbing… If you can’t climb a latter in a game the game is ****…

First off there are very few tutorials out there and they don’t really work anymore. Secondly it is soooo awsome that you are sooo helpful to complain about someone not wanting to spend 125 dollars (Ya I know the price off the top of my head but I refuse to pay that much for something that should be really simple) on something to LEARN!!! What is wrong with you? How exactly did you become a moderator?

Ledge climbing and wall climbing and ledge grabbing is a VERY extensive process. I’ve created blueprints spending months with my partner for a single blueprint that takes 15 seconds to compile on a 8 core processor and when I bought Alex’s Ledge Climb System I was outright amazed at how complex and advanced and HUGE the blueprint was. I would guess in the thousands of nodes. Dozens and dozens and dozens of traces and an incredibly complex animBP and physMats and its just, yeah you wont be re-creating that overnight.

You need to read a programming book about how to approach a large problem (building a program) you break it down into bite size peices and start with one, get it working. Then slowly polish and improve.

Start with getting your character when it enters a box in an empty actorBP to printString(“Hello”)
Then have it so it lerps your characters Z world location from GetActorWorldLocation.z(Enter) to 3Vector(char.x,char.y,char.z+(3vector(0,0+180))
Then build upon that so its not a instant transporter and maybe you have control over it with W and S (axis or action mappings)

LEdge climbing and grabbing is very complex. Heres an example pictyure from the ALCS system, its a FRACTION of his entire setup, and its tailored for a few examples, not a specific game.

Heres about 1/8th of the nodes involved in that 125$ sytem. I got bored of cutting them all into one picture. 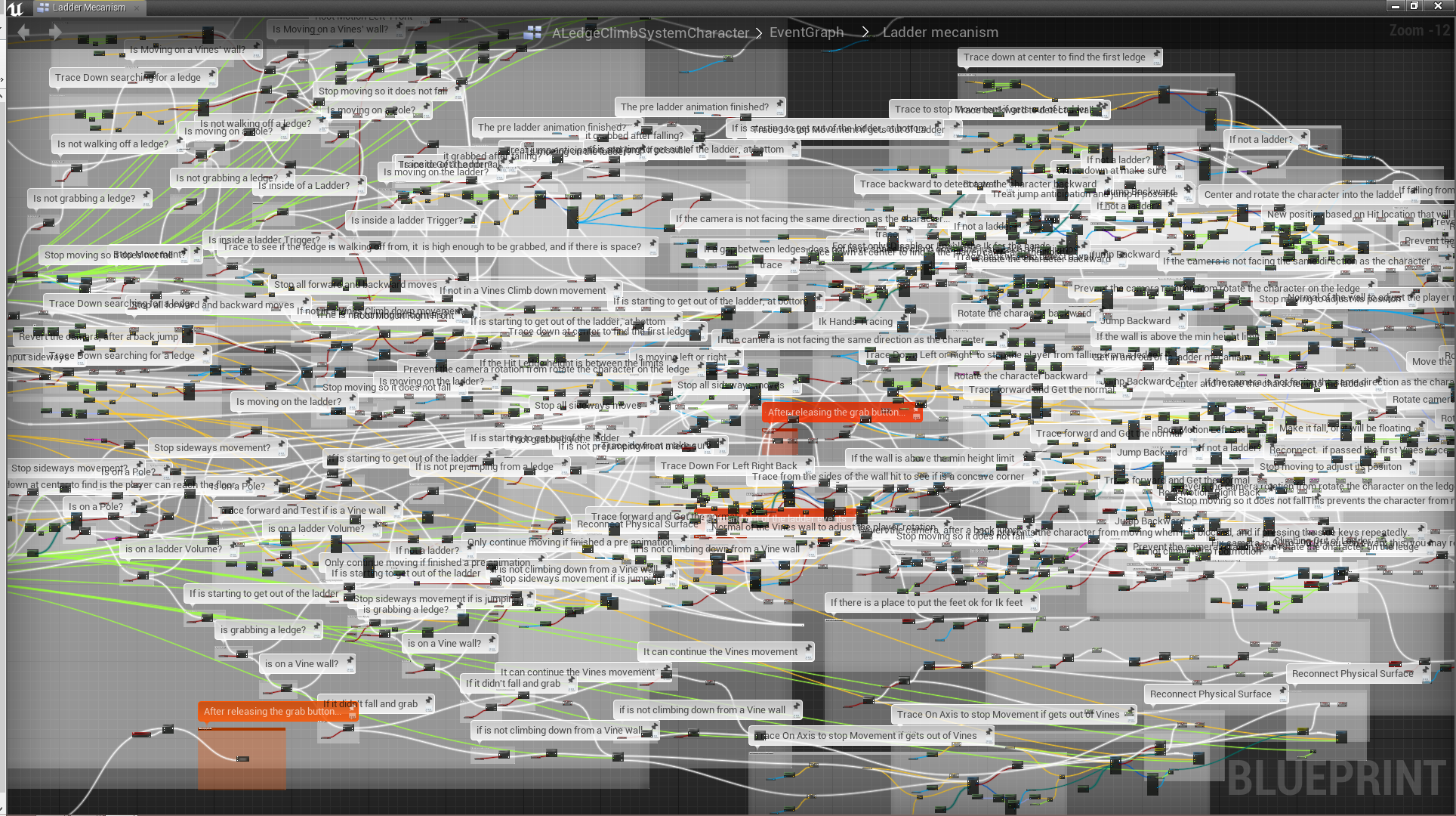 And heres an example of a simple ladder, that uses it.

Were not doubting your abiltiies. But no one is going to make a tutorial on that for you. Tutorials are still new to UE4. I have one of the first/if not the first full crafting tutorial on youtube just today. Loook at some of the few basic ledge grabbing/climbing tuts on youtube and take inspiration from it and build upon it. It might take months and then youll have to re-write it. That might happen 8 times. Such is game development.