How to create a chronometer in blueprint?

I made a 24 hour clock tutorial in my notes which might include elements that bear on your chronometer case: http://goo.gl/jEHT0u p. 40

I think hundredths might just use … a 0.01 Delay duration float (rather than 1 second in the tutorial).

I hope I will make it without any problems.
Just another question: Is the frame rate (FPS) impacts the update of the hundredths?
Thanks you very much.

I guess the update on the screen would be impacted by a slow fps.

The calculation itself I am not sure. You could obtain the Delta float from Tick and subtract that from .01 and feed the result into the Delay if the tick rate is not longer than .01s (obtained via comparefloat). If tick is longer than .01s just use no Delay as the nearest option … but I am not sure it would be likely to happen.
As I understand (though I may wrong) tick is usually milliseconds.

Note you can use a node called Get World Delta Seconds (if you wish).

How to use Delta Time?

I’m currently in the process of taking my game from prototype to Alpha; one of the things that requires is changing the event ticks, since currently gameplay and mechanics can vary depending on the frame rate. I know you can use delta time to set...

Thanks you very much you have been a great help for me.
Have a nice day.

Check out Devin Sherry’s tutorial on how to add a timer to your game. 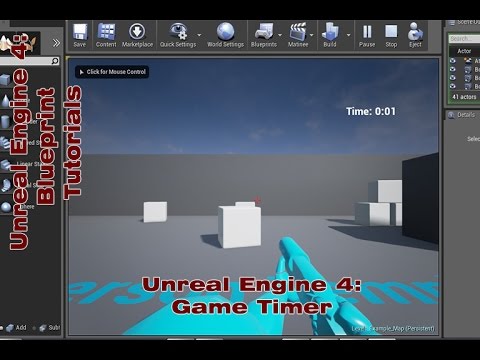 He has the clock being paused by pressing the space bar. You could set this to happen on player death and then reset when you respawn.