How to convert an object to a "prefab"?

Hello all,
I am not sure if this is a question or feature suggestion. I come from using Unity engine pretty extensively and I am entirely new to UE4. I LOVE UE4 and its systems. Creating levels is ultra easy and fun. However, as of yet I have not found a way to save groups of meshes/objectes(brushes) as an asset. In unity these were called prefabs and allowed for anything you created to be reused and placed in different spots. This feature would be highly useful and I think practically essential. I am aware that you can use class blueprints for a similar effect, but doing extensive work in the components section of the blueprints seems much more cumbersome than the natural editor and there is no easy way to drag groups of objects into the component editor. Any advice?

You can create blueprints from actors in scene. Just select whatever actors you want in your prefab, right click on them and select Create Blueprint.

I just tried this and “Create Blueprint” isn’t an option. I tried right clicking on the scene outliner and inside the editor

Yeah, so as EF answered, Blueprints are Unities prefabs. Select any actor in the content browser, right click and you’ll see ‘Create Blueprint using…’ Just above save, fifth from the bottom of the list.

Alternatively, if you’re in the viewport, click on the actor, and in the details panel, right at the bottom there will be a box called Blueprint, in which there will be an expander that has a Create… blueprint option.

I recommend going through these videos though, just to familiarise yourself. Creating a class blueprint is the fourth one in, which is probably what you’re after.

Alrighty, thanks to you guy’s comments I have figured it out.

You can’t create blueprints from geometry brushes it seems, which sucks and I would really like that feature. However, I have figured out that you can select a bunch of actors (not geometry brushes) and in the details panel under blueprints you can “Replace” with a composite blueprint, which imports all the actors and their components into a blueprint. Not ideal or as easy as prefabs, but it’ll do.

Thanks so much for the answers.

You can convert a brush into a Static Mesh and create a BP from that.

oooohhh?? I’ve tried to figure out how to do that as well. How do you convert a brush into a static mesh? (sorry for being a noob)

With your brush selected, go to your Details panel. expand the Brush Settings section by clicking the little arrow. You’ll see a Create Static Mesh button.

Bear in mind, when you create a Static Mesh this way, it starts with no collision on it. This is a known issue we’re working on, but for now you can open your new Mesh by double clicking it, and add collision via the Collision menu in the Mesh editor.

Oh yeah, forgot to mention the part about collision

I don’t see it either. There are 2 ways that I know of to do it.

it apparently doesn’t have to be an “actor” I just did this using a group of static meshes (a table and a group of duplicated chairs to surround it… the chairs each being 2 meshes themselves) and I chose to “replace with Compostied Blueprint” which opened a window allowing me to “Create Blueprint” … which then became available as a “prefab” asset in my content brower.

all I should need to do now, is copy that folder of assets and blueprints to any project folder I want to use a table and chairs grouping in…

Blueprints miss something very important from the UDK / Unity Prefabs : you can’t break it back to static meshes …

Actually in the current version of UE4 (4.8) you can create a new blueprint from selected objects in the level simply selecting “Convert Selected Components to Blueprint Class…” from the “Blueprints” menu in the main toolbar (and not right clicking as EF suggested back, probably at the time the hint was correct). 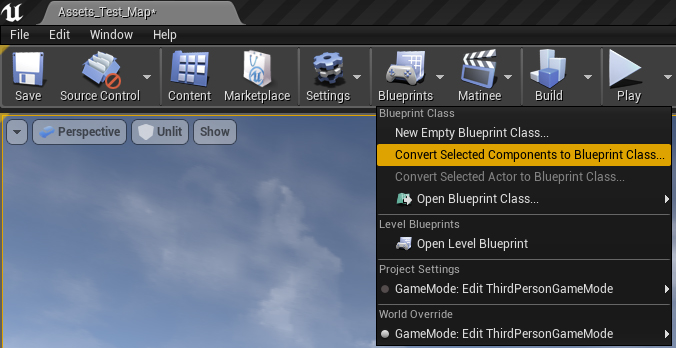