How to change player character in-game

There are lots of casts all over the place for the specific player character blueprint, “My_Character”, where I get and set params, disable/enable control on it.

The skeletal mesh in My_Character is male. I have a female skeletal mesh, which is basically identical to the male one except for it having an anim Blueprint with specific female animations.

I was hoping someone could point me to a tutorial that goes through loading up specifically selected skeletal meshes for the player character.

Why don’t you simply manipulate the settings (mesh, anim blueprint) using the setters?

Hey Enlo. Thanks a lot for the help I apologize for the late reply.
I’ve tried to set the skeletal mesh on Begin Play in the event graph of the Character in question’s BP, but for reason it didn’t work. I probably did it wrong Let me try it again. Thanks!

Edit: I can set the Anim instance but for some reason I don’t know how to change the mesh (maybe because it’s inherited?). I’ll look around for a way to set the mesh of a character in-game. If you could tell me how that would be much appreciated though!

Edit: I guess maybe I should use “Set Skeletal Mesh” in the event graph for the Character BP. Unfortunately, clicking on that Setter it doesn’t look like there’s any field to select the skeletal mesh. I’ll keep digging.

Thanks to Enlo I figured it out. The naming conventions are what threw me off.
In the component list of my character BP the skeletal mesh component is called “Mesh (Inherited)”.

Anyway, here’s a screenshot of the node that needs to be changed in order to change the character BP’s skeletal mesh in-game (I think). Just type in “setskel” and then select the Skin Mesh>Set Skeletal Mesh (SkeletalMesh) function. 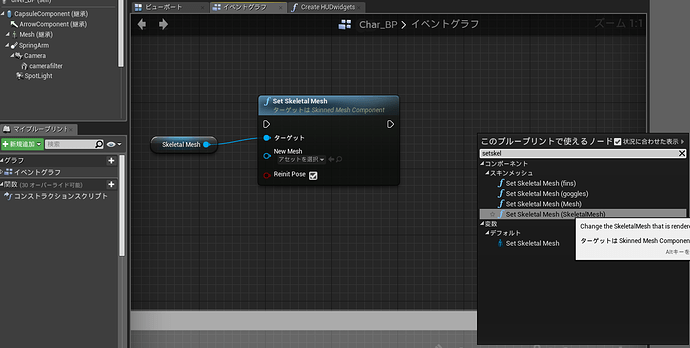 i wanted to know how to change into a different skin! How do i do that? (i still have my default character.)