How to call an event of level blueprint from NPC blueprint?

I have the following situation:

It turns out that the first NPC that passes through the tower destroys it.

This destruction is not instantaneous. The tower has 100 hit points and while in contact with the NPC, it loses 10 life points every second.

I created a boolean variable for target control (varTowerDestroyed). So if it is false, the second target becomes the tower, otherwise it becomes the target point 2.

Blueprint showing the variable (varTowerDestroyed) being set to true, right after the tower’s destruction:

**Display of the control in the target definition:

It turns out that each NPC has its own variables, so there’s no use in defining the value of the variable of just one of them. I would need a variable that would control all at the same time.

I thought of doing the verification based on a variable of the own tower, but as the tower will be destroyed, I imagine the variable will disappear. Impossible to verify:

At the Level Bueprint I created an event that will be called soon after the tower’s destruction. This event will set the Boolean variable to true, setting all Boolean variables of the NPC’s that are created and still generated to be true:

Links from places I searched:

I also saw this video, but I could not: 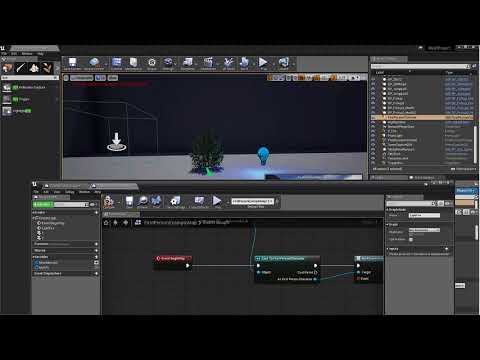 Video #26 in the link below, I discuss how to create an event dispatcher to communicate with the level BP. Perhaps it will explain better than the video you linked…

The video is very interesting and I had seen a similar one, my problem is not so simple to solve because the object to communicate with the Level Blueprint is not placed in the world initially, it is spawned.

After Spawning an actor you can use a ‘Bind Event to’ Node to hook into events.
Don’t have time atm to follow the rest of the thread but hopefully that helps a little…