How to add a hit count (health points) to individual instances?

Hi everyone.
In my project I try to destroy bricks (Instances) after a certain number of hits. For now I’m able to destroy each whats a clever way to add points of health to an instance?

If you have any question on what i have set up rn i will be glad to answer.
Sorry for weird english also :}

The name of the game is Custom Primitive Data (check docs at the bottom).

The material for a brick: 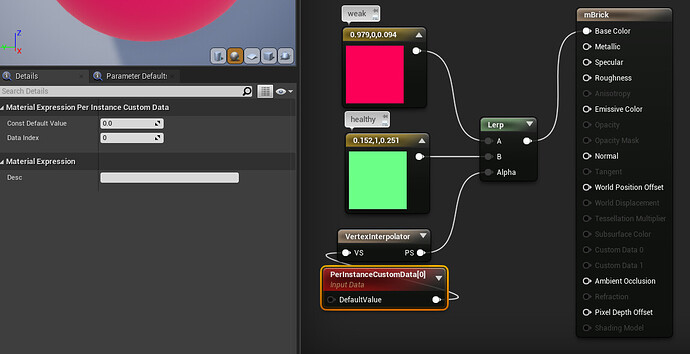 So, 1 material and 1 Instanced Static Mesh, no iteration, no ticking. So this should be good for all kind of fun stuff:

Storing Custom Data in a Material Per Primitive

An overview of the Custom Primitive Data workflow for storing custom data per primitive that's accessible through Blueprint.

Wow Thank you so much man i will try it out !

Do tell how it goes. Technically you don’t need Custom Primitive Data for this and simply keep it all in a map only. But you did ask for clever and it’s not a bad use case scenario for the feature.