How Does UE4 Perform on a Lenovo ThinkPad Yoga 14?

As some of you may have remembered I posted about my M3800 a few years back over here at this LINK. It’s been an a while and I’ve upgraded my system to a ThinkPad Yoga 14. The M3800 is a great machine, but over time I ran into a few battery issues with the Quadro graphics it was packing. Nothing major, but GeForce I have to say is king with UE4 for development so I shopped around for something decent, nothing extreme since I got tired of wasting money on $1000+ laptops since I’m not gaming. So how does this system run? Well the specs are below and it’s OKAY. It’s for modern design and Xbox One X development with my Dev kits, I work at Amazon so the twitch team hooked me up with the PC version of Streamline and it ran pretty good at max settings. This is also my first system with an SSD too (256GB), I will be upgrading the RAM to 16GB’s later on down the road when I get around to it. Also don’t forget I’m not building AAA games! This review is based on my personal dev experience, obviously if you’re trying to make the next Halo or GTA you should be using a Razer or Alienware for that type of development environment. It took about 5mins for the UE4 ZEN demo to load, but once it was up and running it ran pretty smooth. The main selling point for me was that the screen folds all the way back and I was able to use the ZEN demo just fine and editing content with Adobe CC2017 Photoshop & Premier Pro was fine and fast (RAM was killing me though not have 16GB yet). The battery life varies, I was getting anywhere from 5-7 hours on light usage so things like YouTube, web, and emails. Editing 4K content with Premier pro lasted a little over 4 hours which caught me by surprise and was nice to have it last that long. I really liked the keyboard on this system as well, it’s rock solid, this design of the system is nice and small too so comfortable to edit content on your lap. One of the next things I have to try with this system using UE4 is packing an sending content over to the Xbox One dev kits. Since I moved to Seattle last year I didn’t bring some of my main units (dad has them in California, including the fancy blue 360 XNA unit :() so I have some S models to try sending them to here in my office. I’ll update when I use the system some more with UE4, but overall it’s a good system for the $550 I paid. I would recommend trying to get the i7 model with 16GB’s of RAM and it should be decent for most basic content editing in my opinion. I couldn’t find much info here on the forums about this ThinkPad, if any of you guys have one please feel free to share your UE4 experiences here! 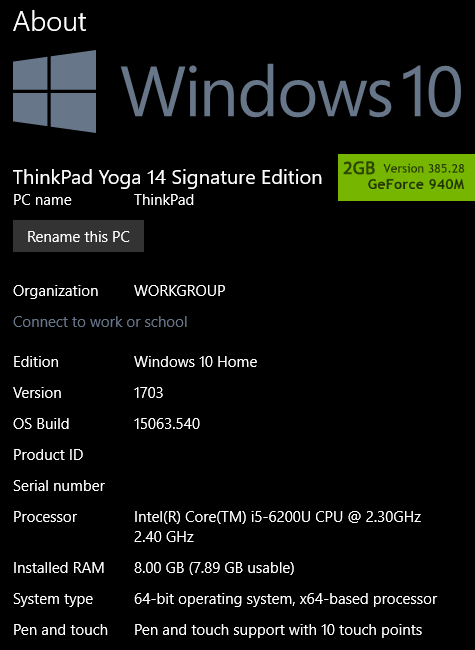