How does the Enum Variable know what to retreive?

I disected this tutorial: 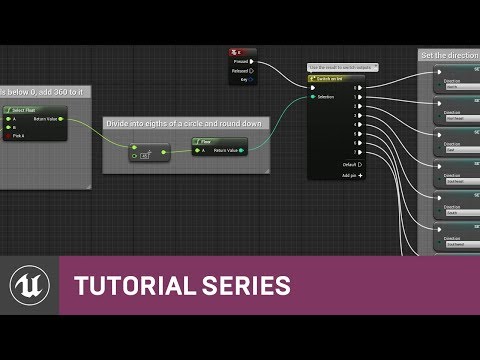 It is a bit confusing for me how the enum knows what string to return to the print.
I know it is obvious that the set function is meant to set the enum to something before the ‘get’ is done.
Maybe I should see it that it has an extra variable or pointer telling it to prepare for one of the 0-7 settings.

I just played the 15 seconds at the link but the enum is being set by the (floored) float at the Switch on Int event.

I just played the 15 seconds at the link but the enum is being set by the (floored) float at the Switch on Int event.

I don’t understand what you mean
.

The Enum is set by one of the 7 SET nodes. After one of them is set, the Print node gets called. Since it needs a string, you need to cast/convert the Enum Value
into a string. That is the green/pink block. And the Enum Variable it self is plugged into it.

So what ever the Enum is set to, the Print will get the value of the Enum at the exact moment it is called and convert it into a string.
This should print a number if i’m correct, since an Enum is only a Named numerical series.

0 = North, 1 = NorthEast, or something like that (just check the Enum you created). So if the “Set DirectionEnum = North” is called and then the print string,
it will get the Value of DirectionEnum and, suprise, show “North” or the matching number.

Yes, yes, I know that the Enumerator is being by set by the SET nodes.

Example: yaw (player rotation) is at 82 (float). 82/45 = 1.82 (float), floor it and it becomes 1 (int). This returns a 1 to the switch on int which, in turn, uses a SET command to tell the enumerator that it’s current value is “NorthEast.” The set command then continues along the EXEC path to the print string node which uses a GET node to print whatever the enumerator is based on everything prior. 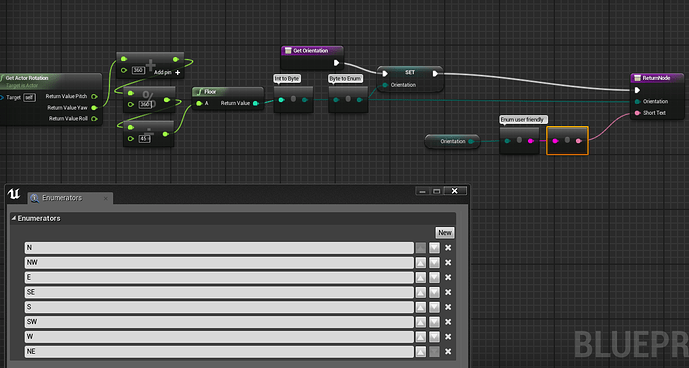 Never mind I get this now.