How do you map Xbox one controller keys in ue4?

Guys how do I map Xbox one controller keys to ue4?

I’d like to set PC keyboard cursor keys to the Xbox one controller as follows:

I’d also like to disconnect the thumbstick inputs so they do nothing on the joypad.

It’s for a project that specifically needs the Xbox one controller so can’t simply use the keyboard controls.

In your project settings look for gamepad controls.

For example you have an input “left”. Your inputs will be “left cursor key” AND “gamepad left trigger”. Then in wherever you’re referencing the inputs make sure you reference the “left” input to perform the action.

Thanks for that, anyone who needs a bit of help and wants to do the same, please refer to:

That have been invaluable.

Btw, you’ll probably need the enable input node in most blueprints to get it to actually work. There’s a disable input node as well. Link them to the player controller.

I’ve mapped from the settings >> input menu, seems to work fine so far.

Hello guys, My right trigger Xbox one is not shooting on the first person template, have anyone had this issue, Im able to fire with any other button but with the right and left triggers is already configure under project settimgs / input/ Fire action mappings with gamepad right trigger

This is an old thread but I was having issues and this was a top result that helped me. Just want to add that in the input settings there is a gamepad icon you can click then just press the controller button you want to use. For xbox one controller this fixed the fire not working with right trigger. After this method the input was “right trigger axis” instead of “right trigger”. 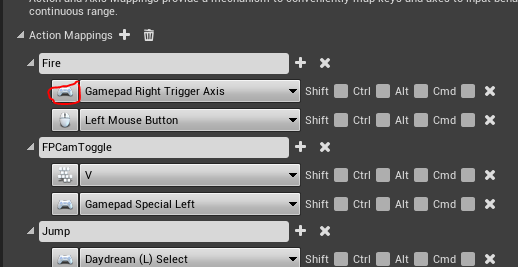 Forgot to mention; if you got a player off of the marketplace or something like that (like I did) then you might also need to modify the character blueprint slightly. Below is a screenshot. The red lines show how it was setup initially, I broke those lines and added my fire input.