Hey, I’m trying to create a custom curve for the gravity scale as shown in the picture I found below from a Reddit post. I can’t for the life of me figure out how to access this screen… Any help is so much appreciated!

Ultimately, I want to delay my character’s jump (not the jump animation, just the z height) by a fraction of a second by making the very beginning of the gravity curve a flat line. Would that actually do what I think it would do? I want the character to have time to complete the crouch part of the jump animation before it leaves the ground. I’ve tried to use a delay node to no avail because I’m not an expert on coding or blueprints. 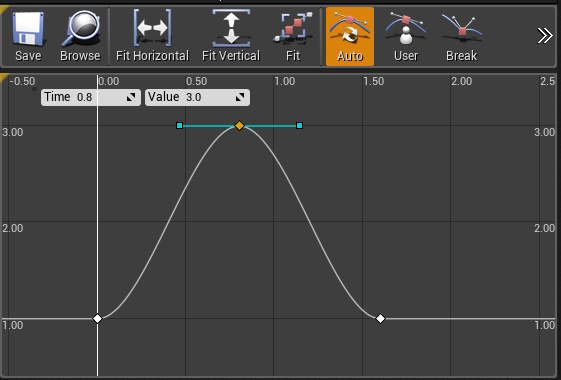 That is a Curve Asset.

Curve assets come in a few different variants, for having the Y value be Float, Linear Color, or Vector. The one on the screen is a float curve.

You can create Curve assets by going into “Add Asset” → “Miscellaneous” → “Curve”.

How would I apply the float curve to the gravity setting though?
Thanks for the info!
P.S. If anyone is reading this and is proficient in UE4 and blueprints, I’m looking for a 1 on 1 tutor for short sessions and am willing to pay up to $35/hr or a flat rate for a simple/quick fix to a problem I’m having. Message me please!

How would I apply the float curve to the gravity setting though?

I’m not sure about that.

I figured it out! If anyone else is interested in changing the jump behavior with a curve, I found this great video explaining how to implement it.

Not sure you need a video.
In the character BP find the skeletal mesh, pull out the animation, cast to the ABp, and use the get curve to pull out the curve value by name.
You can then apply it directly to the movement component.

What won’t work is applying it to the capsule, unless you simulate physics which given the current and near future state of chaos I wouldn’t reccomend.

All in all I believe - by the way you described your usage case - this is a really bad idea.

You’d be better off adding a couple of frames to the animation over dealing with all that other stuff.
Performance is actually important.
Not an afterthought.

And allowing the altering of gravity scale via animation can also lead to potential (and very simple) exploits.

If all you need to do is “add a bit of a delay” use the animation instead.

Because you are calling jump before jump start animation has played.

To offset that you can actually just play a full body slot montage beforehand for jump start, or call the jump from a notify you place in the transition of the statemachine (which supposedly never missfires).

Instead of just calling jump and letting the animation react.

Yeah, I was experimenting with notifies but I couldn’t get it to work with my existing blueprints. I’m not too good with nodes yet.

I’m still looking for someone I can pay to do 1 on 1 screen share sessions with so let me know if you’re interested.