HOW do I save the value of more than 1 actor ?

A basic scenario
Let’s say we have a single-player adventure style game with lots of doors. Each door is an instance of some Blueprint that contains the mesh components and an event graph handling the behaviour. The player can open or close any door, and when quitting the game, the state of each door (open or closed) must be stored in the players savegame object so that the next time the player starts the game, all the doors will show up in the same state they were when he quit the previous game.

This is clearly not an unusual feature, but I can’t figure out how it’s supposed to be handled. Looking through the hidden part of the details panel for variables created in a Blueprint reveals a flag labeled “SaveGame” which, according to the tooltip, should toggle serialization for it in saved games:

It’s probably safe to assume that this flag has something to do with the answer to my question, but it’s unclear how to make use of it. When testing it out using the ordinary SaveGameObject routine, it doesn’t appear to make any difference to the data stored in the .sav-file, so clearly I’m missing some crucial piece of information.

Since this kind of serialization potentially applies to hundreds of actors in any given level, it doesn’t seem like a SaveGameObject is designed to handle it. If the player breaks a destructible, it should already be destroyed when the containing map is reloaded at a later time, and if he finds and steals a one-of-a-kind magic sausage with unicorn dust on it in level 5, then that magic sausage should most certainly not be available again the next time the same player enters level 5… Well, you get the idea by now.

THIS THING > How do I use the SaveGame flag? - Blueprint - Unreal Engine Forums

What you need to do is array’s. For something like this I would probably use 2 array’s. One for location (vector) and one for whether the door is open (bool).

I would then get the door to load the saved locations array and see if it’s location is located any where inside it, if so what index. I would then use the index to find corresponding saved bool at the given index for the mesh. If it’s location isn’t found then save it in the locations array and set the corresponding bool array to closed (false)(or open if that’s what you want the default to be).

If the player was to open the door I would repeat the above steps but instead of getting the array’s I would set them.

Also I made a basic introduction to saving in UE4 for on my blog so check it out. If you’ll like I’ll try make a more advanced one covering the concept I’ve outlined above? (may be a few days though) 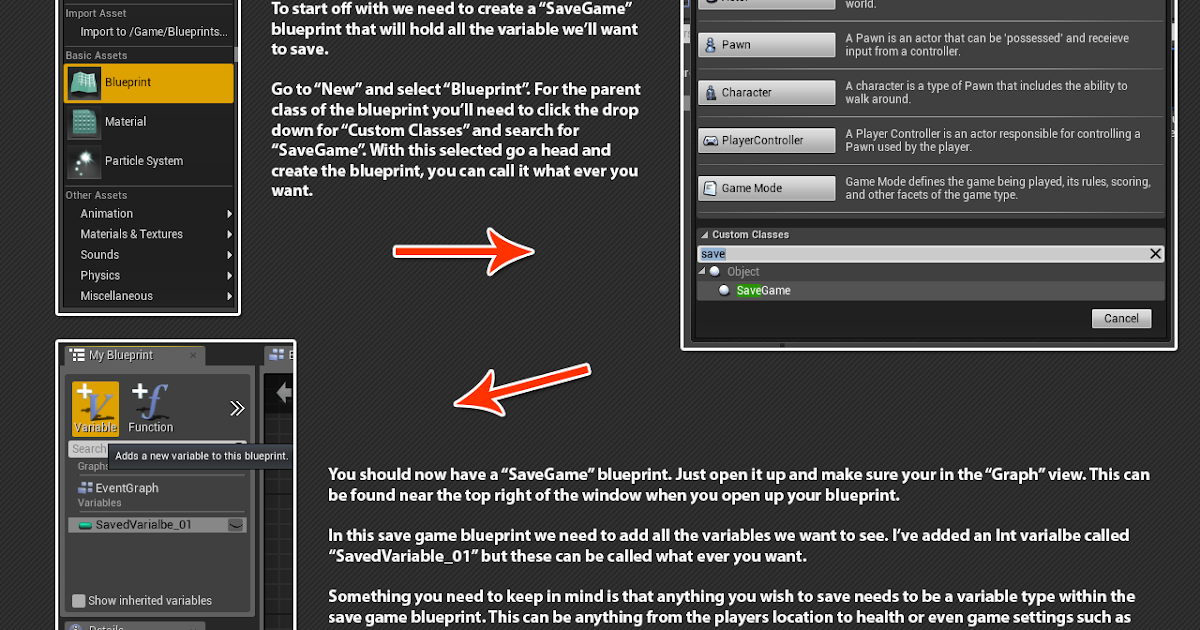 Hi, today I decided I would create a little tutorial about how you would go about saving information in UE4. This process is pretty simple ...

No need I am using arrays , the idea was if there was an “automatic” way for the engine to create the array and assign index without me needing to care.

Now I have 4 vars (arrays) per Quest and each quest has to have a unique name (aka index for the arrays) . This adds clutter to the blueprint , and is prone to errors because you can forget to set the unique name OR the name is the same as one in other quest .

From pretty much the nodes shown below and a little bit in the level BP I could easily place hundreds of doors in a level and have them all get there open/close state saved. With one small tweak in the Level BP I can get it to save based on the level too. With this initial setup I don’t ever need to think about saving this data again as it’ll just do it. Is this the type of stuff your talking about?