How do i optimize the landscape topology dynamically in ue4?

I create the landscape in world creator 2 and then send the heightmap to ue4.
So what do we do for the lowest performance drop?

Change the lod settings? I have tried but didn’t get a nice result. Problems: UE4 creates even more faces close to camera.

For lowest performance drop you just need less components.
and less LOD0 since its more tris to render.

If you enable LOD view mode for the landscape you can fine tune the distance.
On 8km tiles I try and only keep LOD3 and above.

Unfortunately there’s no real way to just completely exclude LODs like you would for a mesh. So in certain cases you’ll see a performance drop from lod0 showing up.
even more of a drop is possible when at the intersection of 4 components.

My best suggestion is. Use the editor. Get everything ready. Bake an impostor. Move the landscape level out of the sub folder so it’s never loaded. Use the impostor level with the static mesh as the base.

Careful though, without components it won’t be culled or reduce overall size. it literally only performs better because the material is baked down to a single texture.
and you do loose the grass node.

what editor u mean?
like this i dont understand at all ->> My best suggestion is. Use the editor. Get everything ready. Bake an impostor. Move the landscape level out of the sub folder so it’s never loaded. Use the impostor level with the static mesh as the base.

Careful though, without components it won’t be culled or reduce overall size. it literally only performs better because the material is baked down to a single texture.
and you do loose the grass node.

I wanna create a photorealistic desert 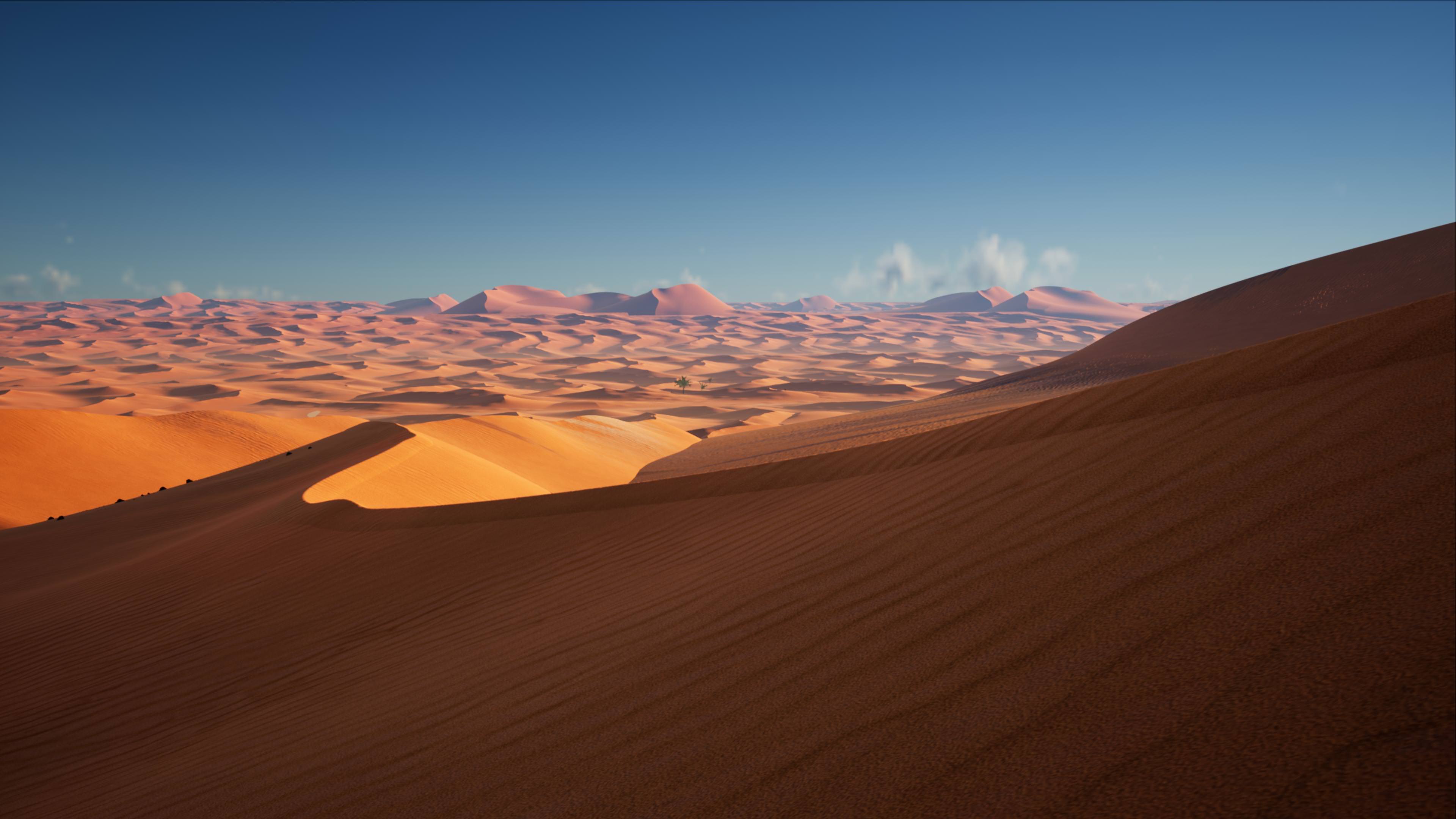 see how sharp the edges of the dunes are. this is very high resolution. how do i do that in ue4?

ue4 only supports 1m resolution, which looks like this: 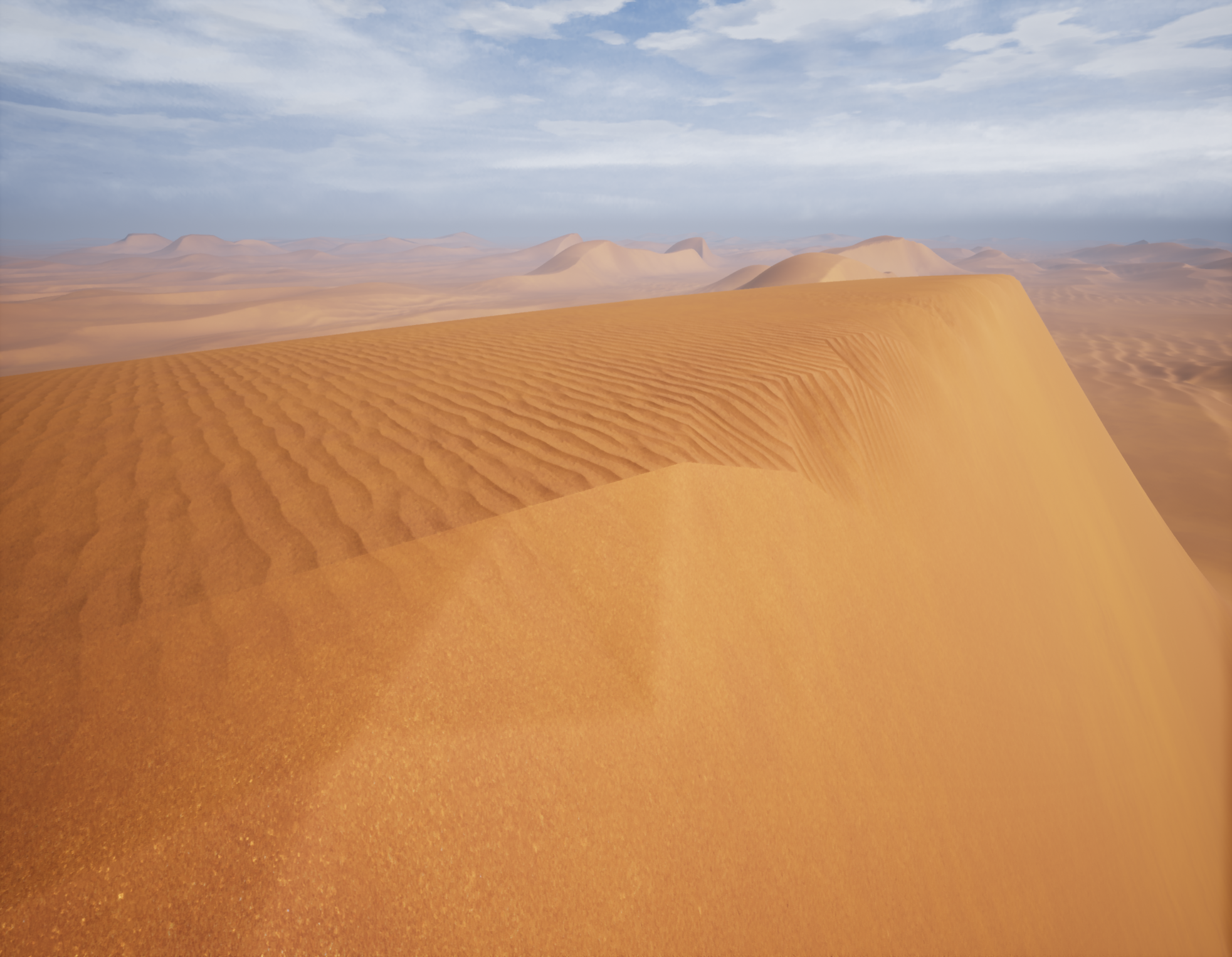 Oh that. Just scale the terrain by 50% (so x and y scale set to 50). But also increase the size of the heightmap files x2.

for the dunes to look better you may need something closer to 25%.
​​​
they’ll never just look “real” unless you set a scale of 1 though. Because the crease of the dune can happen “anywhwre”, not just at preset distance intervals of 50cm or 25cm.

However, that doesn’t mean you can’t “fake” the effect by increasing tessellation on the crease area.
This would only work for situations in which collision is not a must - and for sand dunes edges this is mostly true. If you stand on it it collapses to either side.

To apply the effect, you would need to deal with the material itself.

At a base level, you need a mask.
the mask will be used to crank up the tessellation multiplier and apply a heightmap to drive the shift in Z.

this can involve a ton of shader work to achieve something visually similar.
Prsonally, I’d settle for less resolution, near 0 fidelity to the map (dunes move anyway), and utilize a splat map baked off world machine to apply a different material layer to the dune crease that cranks up tessellation at the center.

a better solution than that? Make a dune mesh in blender… use it with a nice blend into the landscape. Placed them over the landscape’s broken edge. And it will definitely look better without killing performance.

The part you didn’t understand has nothing to do with that.
you can always bake landscapes to meshes by using the world composition tools.
In a desert with no grass and a gigantic expanse you can actually benefit a lot from doing this. But you would lilely loose resolution, not gain resolution (unless you mess with the mesh it produced).

For the mesh making

The cheap solution is to take the the heightmap into blender, create the mesh from the heightmap.
Use a dynotopo style filter that cranks up the mesh tessellation to get the look you want. Or apply a subdivision modifier and then simplify.
the problem you’ll reach is that the mesh being huge and having a lot of verts will cripple your machine.

on another note, Houdini went free, and they have a whole set of landscape tools that produce meshes faster. You could give that a try.
Look at the licensing stuff first. I’m not exactly sure what the “going free” thing comes down to. Beforehand unless you had a license you couldn’t export.