How do I move an actor in Blueprint?

I have the player grab and move items within the level. When an item is clicked and the click is held, I want the actor to move forward for a few units (-15 in the X axis) and then move to the position of the player’s dummy held object which is a hidden static mesh component inside the first person character.

The second part is easier to do because it just involves two world locations and moving from A to B. But the first part of the move is what I am having a hard time with the -15 in the X axis. I can do it by moving the static mesh of the actor, but I want the whole actor to move, not just the static mesh. Many combinations of relative and world rotations didn’t work, that’s where the problem is. My item may have its X axis rotated to where the world Y axis is, but it always ends up moving on the world’s Y instead of local X.

I want this to happen whatever the rotation of an item is, and since I will have many items in the level, I need something that works in any possible rotation AND moves the whole actor instead of just the static mesh. Any ideas? 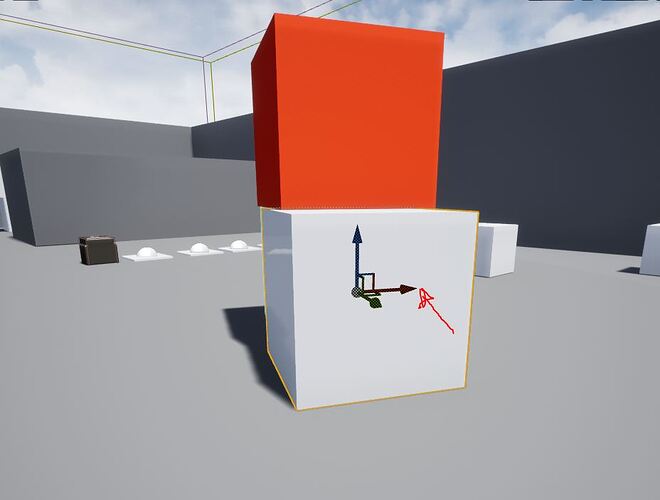 But it looks like you are calculating the delta location oddly, based on the forward actor of the hit target, rather than anything to do with the player aiming position. Is that intentional?

Assuming it’s not I would calculate a distance offset at the beginning when you start dragging an item, and then use that distance to calculate a floating position in space ahead of the player forward vector that represents the target location you want to be dragging towards, then calculate the delta from that by lerping the actor location of the dragged actor towards that position.

You mean your whole actor include the red box and the white one, and you can only move one of them?