How do I get my Timeline to reverse?

Beginner to UE4 here. I’m following a lift tutorial and have come across the following issues (sorry, couldn’t list them all in the title)

Here is how I had mine setup which seemed to work pretty well. There are a lot of variables because it was customizable.

Thanks for the response. Looks like you are doing it a different way to me (and your lift automatically returns after use?), I don’t suppose you’d know how I could fix things, with the setup I currently have? Cheers!

The problem with your setup is the Set Actor Relative Location node. Replace this node with the Set Relative Location node, and make the Target your Blueprint’s mesh component. If your Trigger Volume is childed to the mesh, you should see the behavior you’re expecting. Something like this:

Let me know if that doesn’t help!

Yes. It returns and the delay was configurable on how long it took until it returned.

You could replace the delay with end overlap so the elevator goes back if the player is no longer in the overlap trigger.

This works fine and you can set it up to rotate and other directions like a angled lift or a horizontal one.

The timeline can get a bit messy. It could be the float in your timeline it should be just 0 to 1.

I have it set up as per your image, and have attached an image of the blueprint setup below with the timeline. The lift however seems to fly off when stepped on (previously it was at least rising to the correct position), any ideas why this might be? 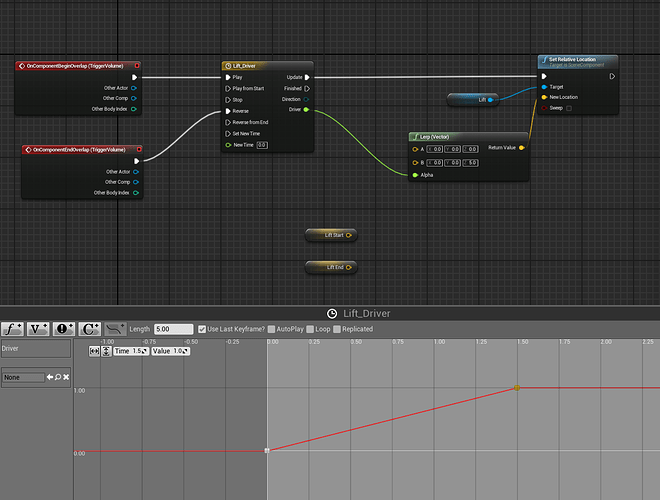 It looks like you have your Timeline set so that it increases from 0 to 1 over 1.5 seconds, then remains there for another 3.5 seconds. You can adjust the total Timeline time in the Length field inside the Timeline, and it would probably make the most sense to lower it to match your desired Lift movement time (1.5 seconds, in your case).

So what yours should be doing is moving the Lift along the Z axis 5 units along a linear timeline for 1.5 seconds. Is that what you’re looking to do? Is that not what’s happening?

I adjusted the timeline to be 1.5 following your suggestion. I am trying to get the lift mesh to simply move up in the z-axis yep (I will adjust the timeline eventually), but that’s not what’s happening, it seems to be quickly moving off to a random location (maybe the origin? Not sure…can’t find where it went). Thing is, when I was using the Set Actor Relative Location node previously, it was at least functioning (moving to the right position), but then I had the other issues with it as mentioned earlier

I’m guessing you’re using your mesh as the Root of your Blueprint. Try adding an empty Scene Component and making it the Root, and putting the Lift component below it, like so: 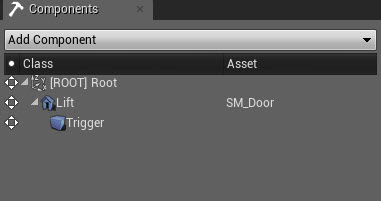 The way the Set Relative Location node works is to take the Component you specify and move it to a location relative to its Root. So without a Root to compare its new location to, it’s moving it to a location relative to the origin. If you have an empty Scene Component as the root, it will act like an anchor for the Blueprint, and the mesh itself will move in relation to the Blueprint’s location in your level.

That was it Ben, thanks, it works perfectly. They should mention this in more tutorials