How do I fade objects in UMG together instead of independently?

Whenever I try to make a widget or a Border element that contains multiple objects partially transparent in UMG, it doesn’t behave how I expect. Instead of fading all of the objects together, the opacity of each element is changed, causing a distracting overlapping effect (as pictured.) As opacity is reduced, I should see more of the dark grey background but not be able to see the individual objects through each other. For example, I don’t want to see the plant image underneath the red box.

Is there a way to do this? I’ll be using this feature a lot. Thank you in advance.

See if this helps:

Is this the result you’re after? Somehow I feel it isn’t.

Unfortunately, that isn’t what I’m looking for.

Here are couple images with the UMG panels. I need a way to change the opacity of a parent object and have its children fade out as a group. I shouldn’t be able to see the underlying Unreal logo. The results in this example look like the opacity of the plant and unreal logo borders have been changed independently even though they have not. 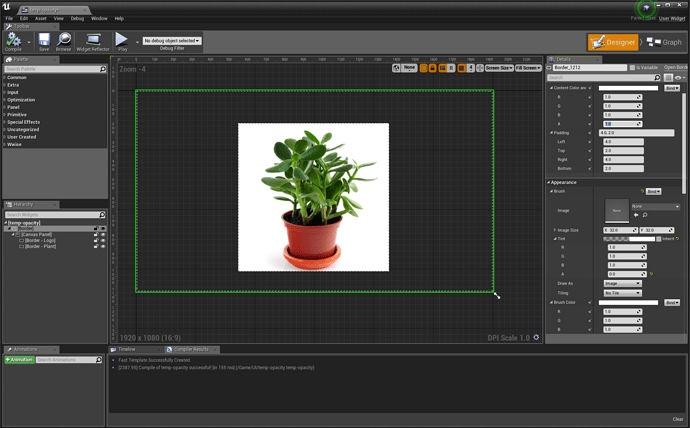 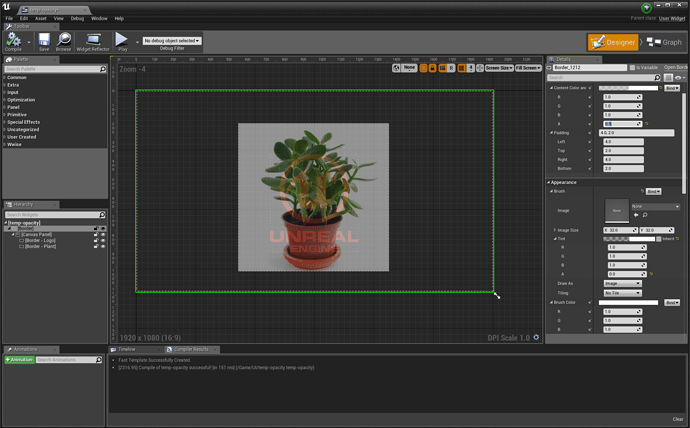 Hey, I’m facing the exact same issue… Have you found an answer to this ?

I keep coming back to this question unsure what you’re actually asking.
Because it seems like you’re asking for multiple stacked objects to become translucent without being able to see each through the other… which isn’t how translucency works.

I can think of some paths you might consider, but I don’t know how you would go about them.

To find a way to render them as a screen render of sorts, so that you have their fully opaque collection as a single image to be faded.

Or to bring the screen behind them into an overlay on top of them, with gradually increasing opacity. This being the one I think the engine is more likely to already have the features to accomplish.

Not much help, I know, but I never did any really complex work with widgets.